The traditional sales force strategy of person-to-person selling has historically been viewed as transaction-oriented rather than relationship management. (Gilley et al., 2009, p.14) The attitude has mainly been reinforced by the reward system that marks the revenue-focused transactions hence the strategy being one of stimulating, not meeting demand for products. (Gilley et al., 2009, p. 3) In that respect, sales people in the pharmaceutical sales force have had the least contact with hospitals as institutions because hospitals have been viewed primarily as buyers. (Bhatt et al. 2011, p. 2) Sales people have mainly been dealing only with the hospital administrators (non-clinicians) responsible for purchasing drugs. (Bhatt, Doll, Jagannathan, Kors and Pawky, 2011, p. 7) Thus, there has been minimal contact between the sales force and the hospital clinicians, physicians, management and workforce (Kotler & Armstrong, 2004).

Change management used organisation tools to aid transitioning to new management methodologies and business strategies. A difference existed between change and change management and the distinction has been important to understand and to act upon. (Rees & David, 2011, p. 102) Each of the terms must be used very carefully in explaining how change management will be handled before the process begins. The verb ‘to change’ is a word to describe the actions necessary to make the change management happen. On the other hand, a change management model has been a plan instituted to reach established organizational goals. For example, a manager asks employees to make changes within the structure of change management plan. But the essence of change management is the process of transition from one state to another. Managers have the responsibilities to (a) make sure that everyone involved clearly understands the goals so everyone is headed in the same direction, and supporting the employees as they move from their traditional way of doing things during the transition to the new way of doing things. Each person’s tasks in the initiative to change must be well-defined; questions should be answered as carefully as possible to avoid confusion and/or confrontations.

Are you in despair because of writing essay for scholarships? Worry no more! Get the best scholarship essays online today at Pro-Papers essay writing service!

A global or wide view of the change process was presented by Zijlke (n.d.) and was useful in determining the environments influencing the company’s behaviour with respect to change. The model took into account the stakeholders that composed the influencing environment. The influences to the business environment were not the same for each company but the basics, with reference to Zijlke (n.d.) started with management. Extrapolation of Zijlke’s (n.d.) theory to a pharmaceutical company meant including competitors, account managers, the sales force, the key customers, customers in general, the public, regulators, and the economy. The interesting point that Zijkle (n.d., p. 2) made, was that change always comes down to the level of individuals who will exert their perceptions and values on the change process. The individual may not have the whole picture, or may not have the same outcome in mind, or may event view the change as a threat to their power. Those interpretations had a negative impact on the plan and the behavior/action that the plan motivates (Zijkle n.d., p. 2).

Change efforts were defined by a number of elements including the change purpose and the purpose, the measurements, necessary leadership style, the motivation for change as well as the focus for that change. In that respect, there were two main types of changes that were crucial for addressing the arising issues. Change management approaches were dependent on the nature of change and its drivers; given two types of changes (a) the economic value driven change and (b) the organizational capability driven change. Thus, the forthcoming transition in the pharmaceutical industry was classified ad economic-value-driven since it focuses on enhancing value delivery through customer relationship management. (Hiatt & Creasy, 2013)

In pharmaceutical industry sales transitions, change management was said to be dependent on factors as listed below.

Change efforts were defined by a number of elements including the change purpose & measure, necessary leadership style, the motivation for change as well as the focus for that change. In that respect, there were two main types of changes that are crucial for addressing the rising issues. In that view, change management depended on the nature of change and its drivers; including the economic value driven change and the organizational capability driven change. Thus, the forthcoming transition in the pharmaceutical industry was classified ad economic-value-driven since it focused on enhancing value delivery through customer relationship management. (Hiatt & Creasy, 2013)

The John Hopkins Medicine Office of Organization Development and Training designed a Change Management Toolkit for managers needing to institute change. (See fig. 2-3) Eight ‘tools’ or actions that were to be implemented in order to implement change starts with a making sure that a sense of urgency has been established. Everyone needed to understand why the change is necessary and why it is necessary ‘right now.’ Next a “powerful guiding coalition” was formed and a vision created to describe the goal of the change (JHM, jhm.org). The vision needed to be communicated in a clear, understandable way and individuals needed to be empowered to act in order to reach the vision. Benchmarks were critical to show short-term goals and to identify when these short-term goals are met. Reinforcing the improvements instituted by the change and those producing more change led to institutionalization of the changes into the organizational process. (See fig. 2-3)

Storbacka and Nenonen (2009) studied buyer-seller relationships within the domain of organizational performance. The purpose of their research was to explore the dynamics of customer relationship heterogeneity performance and how it links with a company/corporation’s performance. Their approach of using customer relationships as the unit of analysis was new at that time. Strategic management evaluated the heterogeneity between companies and within a company. “The encounter process and relationships practices” were discussed in reference to the importance of the creation of value (Storbacka & Nenonen, 2009, p. 360). Value capture was defined as “the discounted present value of all future economic profit from the relationship” between company and customer (Storbacka & Nenonen, 2009, p. 360). In that sense the value capture was created from (a) a customer, (b) the dependence of one customer on other customers in a defined customer base, and (c) the company to customer relationship (Storbacka & Nenonen, 2009, p. 360). The study of KAM improved form the research by Storbacka and Nenonen, because the described the heterogeneity of key accounts. Also value identification and creation were identified as end goals of KAM.

The purpose of the Storbacka and Nenonen (2009) was two-fold. Firstly, to argue that a company built and managed relationships with their customer base with a strategy that strengthened the company. Secondly, to argue how companies managed customer heterogeneity and their relationships with customers and their customers’ portfolios uniquely according to the needs of each customer. Even though the customers were handled with different strategies, in the long term this brought the best results for the company.

Past research has addressed the activities of companies and how particular activities can be strategically implemented to create value. The physical resources a company used to produce value are their location and specialized industrial equipment, their employees’ talents, knowledge and skills, the daily routines, rules, company culture, and operational processes, and their relationships with not only their customers, but also with their suppliers, professional associations and partners (Barney, 1991; Edvinsson and Malone, 1997; Morgan and Hunt, 1999; Eisenhardt and Martin, 2000; Kalafut and Low, 2001; and Daum, 2002).

Interestingly, (Storbacka and Neononen 2009, p. 361) then proceeded to explain another aspect of customer to business relationships which has a more realistic view than the historical perspective and matches well the foundational concept of KAM. In fact, it was a building block of service-dominant management because instead of measuring the value of a manufactured product, the measurement was the consumption of a service or product by the customer (Vargo & Lusch, 2004; Storbacka & Nenonen, 2009. p. 361).

Naturally, this led to the concept of considering the customer an active participant in the customer-company relationship, rather than a passive receiver of goods (Prahalad & Ramaswamy, 2000; Sorbacka & Nenonen, 2009, p. 361). Therefore, relationships between customers and a company were considered as “longitudinal social and economic processes for the co-creation of value” (Payne et al, 2008; Storbacka & Nenonen, 2009, p. 361).

Definitely, there can be a moment when there is no time and no possibility to find enough time to work on academic term papers. If so, turn to Pro-Papers term paper service to write it for you and you’ll be glad with the result.

Value capture was dependent on the relationship performance with the value creation from the customer. (See fig. 2-2) In other words, the relationship performance moved longitudinally in two directions; the performance motivated value creation that is of value to the customer and in the other direction the company was able to capture the value from the customer. In this application value was considered as ‘co-created’ because it was the interaction between the company’s capabilities and resources and the customer’s capabilities and resources that create value. (See fig. 2-2) Value capture rippled through the company to increase shareholder value (Storbacka & Nenonen, 2009, p. 362). 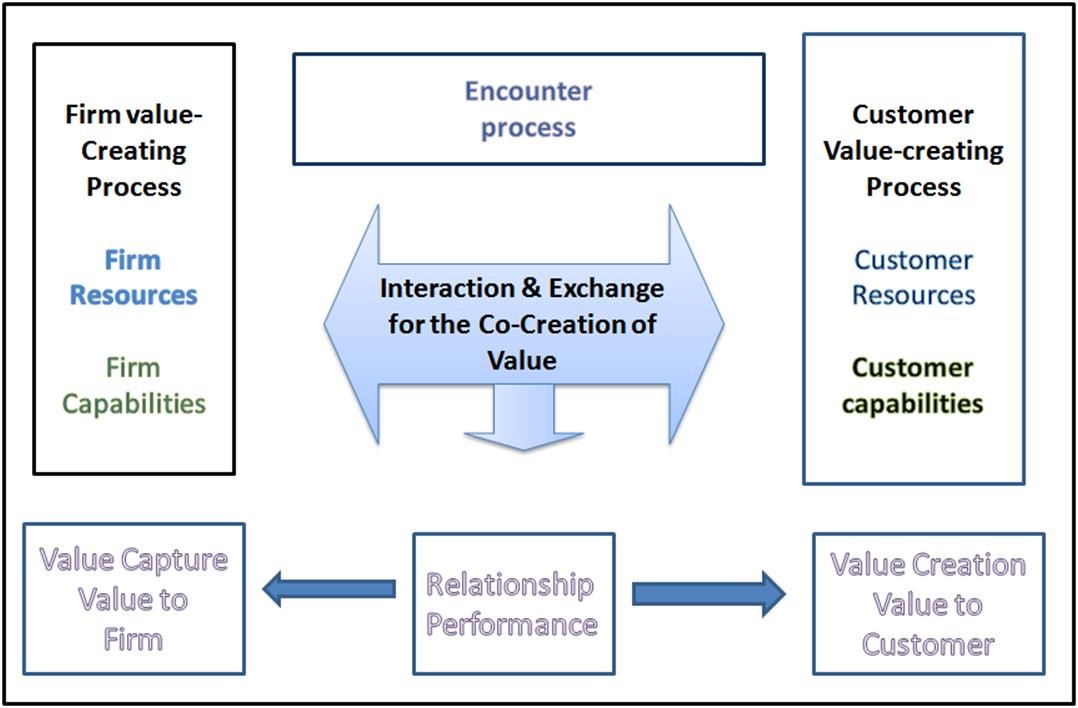 One of the most commonly used accounting based measures, which is customer profitability (i.e. accounting profit per customer per annum), was shown to vary significantly between customers (Mulhern, 1999; Kaplan and Narayanan, 2001; Storbacka, 1997; Storbacka et al., 1999). Thus, the heterogeneity of annual profit per customer was understood as a driver of the heterogeneity of company performance (Storbacka & Nenonen, 2009, p. 362). The strategy came in full circle and demonstrated the customer value in relationship to company performance.