The research linked a case study, experimental research, and correlation research. A questionnaire was prepared so a survey could be offered to appropriate participants from the Greek pharmaceutical sector. The in-depth face-to-face interviews strategy was used by Priporas and Vangelinos (2008). The data produced by the research of Priporas and Vangelinos (2008) was practical. Their results included insightful and interesting comments from the interviewees. The rationale links three main components, knowledge claims, inquiry strategies, and data collection methods, in the best way to research the case study on the Greek pharmacological sector during crisis. Research limitations, validity and ethical considerations are included in the methodology chapter. The organizational structure for carrying out the research is described here. Tellis (1997) set out four stages necessary to carry out a good case study.

If the task you are given is too hard or it has infeasible instructions, our writers will gladly help to do my term paper for me. Thus, you’ll be able to submit a premium-quality academic term paper on time.

Bhatt (et al, 2007) graphed all the accounts a pharmaceutical company held to identify potential key accounts. The strategy defined the scope of KAM in order to direct investment appropriately, increase cost savings, and improve efficiency Bhatt (et al, 2007, p. 4). The criteria were very useful and usable. The Bhatt (et al. 2007) research chose the criteria to identify lifetime value and complexity. A scatter graph of account opportunity versus degree of account complexity showed that highest priority accounts were those with the highest account opportunity matched with the highest complexity. Bhatt (et al., 2007) were using the European health care sector as an example. The key accounts were “large multi-specialty hospitalization/chain with high control and where non-clinicians are important” (Bhatt et al., 2007, p. 4). Those were the counts to treat with KAM and with the highest skilled entrepreneurs (key account managers) available. The research process details are available in this chapter. A well-planned methodology is the basis of a reliable and practically useful research paper. The steps of the research that involve collecting the data, making the data analysis, and writing are the methods for preparing research. (Creswell, 2003, p. 1) Methods are the “techniques and procedures” that are chosen to gain knowledge on the subject of the research. (Creswell, 2003, p. 4) Methodology consists of the plan of action linking the methods to the outcome. (Cresswell, 2003, p. 4)

The business consultants Aberdeen Group (2007, p. 1) published a white paper on how key performance indicators (KPI) need to be used in order to make “smart decisions.” The leadership of a company, executives, directors, and managers can make better decisions in a smaller amount of time once they identify the relevant KPIs. An Information Technology director of a “large hospital system’ was quoted saying the greatest difficulty is delivering the KPI information to the decision-makers (Aberdeen 2007, p 2). The IT director continued, explaining that it was not the KPI alone driving performance, but the complete package of details and data that is attached to KPI reports (Aberdeen 2007).

Research enhances the understanding of the daily activities in a business. Human behaviour including transactions, activities, goal setting and hundreds of other processes take place on a daily basis. Developing and using a systematic process to understand the behaviours in the daily business environment builds a base of knowledge according to Saunders (et al., 2009). The research process has been described as an unambiguous sequence of planned actions to evaluate intangible and tangible inputs and outputs. (Maylor and Blackmon, 2005) The inputs and outputs are the natural daily necessities for conducting business such as resources, knowledge and time.

Johansson (2003) explained that case studies are different, because more than one methodology can be used. The use of related but different methodologies allowed the researcher to consider the subject of the study from different perspectives. Figure 3-1 shows a schematic of the concept of a case study from Johansson (2003). The triangular shapes on figure 3-1 represent the way different concepts can be triangulated with the case study. Experimental, correlational and case study were the triangulation used for the research. The interview and survey tools allowed the researcher to manage the variables. (Johansson, 2003) The crisis in the pharmaceutical company was the independent variable that caused an effect on the other (dependent) variables. Correlational sits between experimental and qualitative in the figure. Correlational research is like qualitative research because they both spotlight events that occur naturally. (Johansson, 2003) Correlational research is like experimental research because it depends upon quantitative data. (Johansson, 2003) 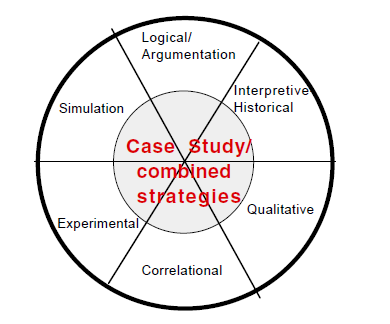 The business world is changing very quickly due to the globalization of marketplaces; therefore evaluating the best way to change and remain flexible to accommodate changes is essential. Forrsell (2008) recommends using theory based leadership and management to enhance the ability to work with a team effectively. The case study approach can offer knowledge on business awareness and organizational changes in order to understand the influence of the global financial crisis on businesses. (Tellis, 1997)

The researcher must choose a philosophical approach for an orderly collection of knowledge so the amount of understanding builds as more data is gathered and added to the pool of knowledge. The philosophy is the framework for determining the data and information that is relevant to the research and appropriate for the study. (Saunders et al., 20008, p. 600) Cresswell (2003) has suggested knowledge claim positions that can be chosen base on their suitability to the research

The four knowledge claims are post-positivism (an empirical approach), advocacy and participatory (a political approach), constructivism (to generate theory), and pragmatism (to understand real-world systems). The research for the case study on the Greek pharmaceutical sector is based on pragmatism. The research uses two qualitative approaches, literature review and questionnaires, to understand the actions of a business under crisis and the consequences of that action. The research is problem-centred. The research is also pluralistic, because a variety of processes and systems are observed. The conclusions have been drawn from the various managerial inputs and outputs resulting from crisis.

Qualitative research does not have the capability of using standard tools and measurements in the same way as quantitative research. (Attride-Stirling, 2001, p. 385) The data is cannot easily be described by units of measurement. Therefore the research approach is inductive, not deductive. Inductive reasoning demands the researcher to pay close attention to cues in the context of the business setting. Human behaviour can be observed in terms of reactions, interactions, and transactions; the observations are used to gain a better understanding of human aspects of the business setting. The organizing themes in this research are change, crisis and KAM management and the Greek pharmaceutical sector (Attride-Stirling, 2001, p. 389).

The data has been collected qualitatively with a literature review and with online questionnaires. The data cannot be generalized because the case study is focused on one country and one business sector. The frame of reference of the research subjects is not from a distance, but instead the researcher has been in contact with the interviewees and constructed a questionnaire for their use.

The literature review added information focused on the Greek pharmaceutical sector and peer-reviewed articles, as well as articles on change, crisis and key account management. The advantage of using the case study method was the ability to evaluate one sector in one country, rather than try to evaluate an overwhelming amount of information. A case study offers the opportunity to learn about reaction’s to the real-life problem on a personal level. Observing how businesses react to crisis in a real-life scenario is an opportunity to understand how business theory is used when challenges occur in the global and national business environment. The data can be integrated although the data resources are diverse.

The disadvantage of a case study can include the amount of time and effort for developing a design and collecting the data for the research project. The data came from several sources. Time and concentration was needed to organize the data, analyze and interpret the data, especially from the questionnaires.

According to Boote and Mathews (1991) the method of descriptive survey can either involve application of qualitative or/and quantitative methods in collecting more data and information on the subject matter. In that respect, this research applies a qualitative approach that uses questionnaires in collecting data. (Boote & Mathews, 1991) Malhorta (1996) described the advantages of using a questionnaire over other primary data collections like interviews include the fact that questionnaires are easier to administer and less expensive as well as protects respondents’ confidentiality. In light of these advantages and appropriateness of the survey method, descriptive research methodology is chosen for this research with questionnaires being distributed to respondents to collect details that relate to their perception of the transition’s effect on the companies as well as their management. (Malhotra, 1996) In addition, the survey will involve collection of secondary data that will rely on existing studies and published market and industry data. In that respect, the survey will be applying triangulation where several methods are applied to arrive at a common finding. (McDaniel & Gates, 1995)

The online questionnaire has limitations as well as benefits, but for the Greek case study the instrument has been well-suited. Distributing the questionnaires did not cost money and a profession site for social media could be used to connect with professionals specifically in the Greek pharmaceutical business. The delivery of the questionnaire was fast and the response time was relatively fast (compared to using the postal service). Tracking the respondents was easier using the online method.

Pro-Papers has many specialists who will gladly create an original reflective article or help you to finish it before the time expires. Hence, when you feel the need, don’t hesitate to contact our team and ask for professional assistance.

Purposeful sampling is acceptable because “it provides reach and in-depth information” (Priporas & Vangelinos, 2008, p. 91). Although the sample size is small purposeful sampling was useful for targeting managers in the Greek pharmaceutical sector, the group who has the most useful information to offer to the research. The quality of the data has priority over the number of data sources (Priporas & Vangelinos, 2008).