If you are in a hurry and stuck right at the beginning of the paper, then looking for someone to help with reflective papers will be the wisest decision. In such case we’d like to recommend you a Pro-Papers essay writing service.

These ratios indicates the ability of an entity to honor its short term obligations. Also known as pure balance sheet ratios, they help us in having an inside view of the working capital of the company. 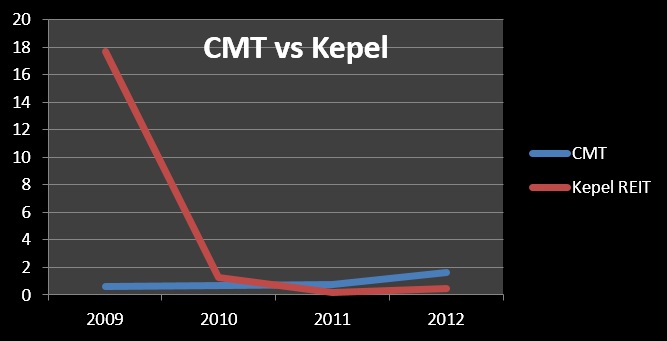 ** Since REIT do not manufacture or purchase any sort of inventory, there is no point of calculating their Quick Ratio

One of the most important ratios for the analyst and the investors of the company as it helps in understanding the profit margins being earned by the company. 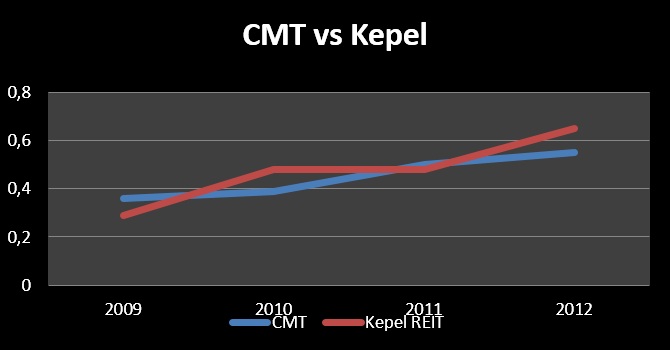 These ratios are used to judge the long term solvency of the company and also to adjudge the level of financial solvency in the company. 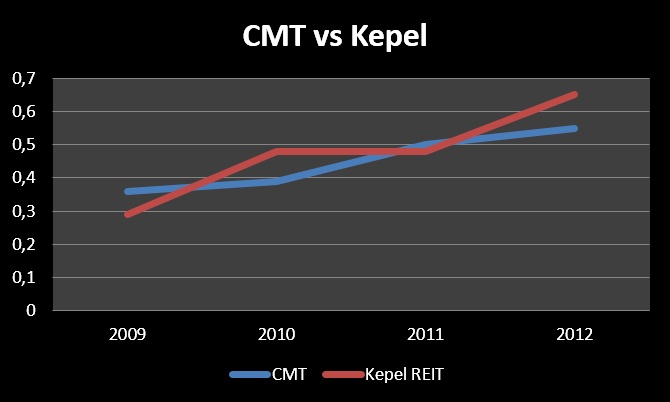 Referring to the above ratio comparison and graphs drawn we can infer that while CapitalMall Trust has been consistently growing with its financial stability, Kepel REIT has not been consistent in its performance. For instance, referring to the liquidity analysis of both the companies, while CMT has been successful in maintaining a health current ratio, Kepel REIT has saw a significant decline its Current ratio decreasing from 17(2009) to 0.43(2013)

The same scenario goes with the profitability analysis of both the companies. Although, post the global financial crisis years, i.e. the one beginning from 2009, both the companies managed to maintain high profitability rates but with passage of time, while CMT has been consistently and sustainably increasing its Net Profit Margins from 60.93%(2011) to 81.3%(2012), Keppel REIT saw a significant decline in its net profit margin during the same year of comparison from 372% to 210%.

Financial leverage multiplier, also known as equity multiplier, is the calculation of a company’s leverage on debts to artificially increase its return on equity. Equity multiplier enables the possibility for a company with poor sales and margins to uptake excessive debts in order to allow investors to see the portion of equity obtained from the result of debt. Financial leverage multiplier can be calculated by dividing total assets over shareholders’ equity.

The five step Du-Pont Analysis is the extension to the three-step model. Under this method, net profit margin is expanded further with the inclusion of the tax effect in the Du Pont Equation. The 5-step equation builds with further extension of Net profit margin by changing the net profits into Earning before tax* (1-tax rate). Thus, ROE is transformed into:

Need to write a cover letter with referral but you have no skills for that and looking for someone to help you out? Pro-Papers writing service is always ready to cover your back, so don’t hesitate to purchase your paper here.