Credit enhancements could be in numerous shapes, Schedule HC-s depending BHCs inform the securitization activity. Out of the three forms, the first is the credit enhancing interest only strips. According to Schedule HC-s, mandates these strips as those reported on balance sheet asset, either in form or in substance, that represents the right to receive partly or fully, the interest due on the transferred asset as well as exposing the bank to the credit risk which is in excess of its prorate share claim using subordination provisions or any other form of credit enhancement techniques. HC –s mandates also note that the field for enhancing credit interest only strips may consist of excess spread accounts also. Excess spread is defined as the monthly revenue remaining on a securitization, after paying off the investors’, servicing fees, and other charge offs. These excess spread accounts are actually a line of defense against losses for the investors.

While writing a critical response essay, you should tell others what you feel or experience after reading a book, for example. If such writing is difficult for you, try to order your essay Pro-papers writing service.

The next class of enhancements is the subordinated securities and other residual interests credit enhancement. By maintaining a junior claim, the securitizing bank remains in the position of first loss bearer, hence providing cover to senior claimants. Therefore, subordination is primarily a buffer on collateral. The last class of enhancements is the standby letters of credit, obligating the bank to fund a securitization sector, ensuring investors’ receiving their payment on time. The primary question is whether the risk retention is important, as it acts as a buffer against observable risk. The Dodd Frank Act requires mandatory retention for the sponsors of asset backed securities.

As already mentioned earlier, the amount of regulation in the US financial markets is much lesser. This being the scenario, whenever there is a solvency issue with respect to certain institutions of the subprime markets, the so called non-regulated companies faced liquidity crunch and hence the trading used to stumble. Lack of transparency in the market is another reason behind the crisis. During the years 1930s and 1940s, banks fixed to the essentials of taking huge deposits and making loans out of them. The Congress did not interfere into this yet again until the year 1956, when it passed the Bank Holding Company Act in order to keep financial-services conglomerates from gathering a large amount of power. That above stated law passed by the Congress created an obstacle between both banking and insurance in reaction to antagonistic acquisitions and development activities by Transamerica Corp., a famous insurance company which owned Bank of America and also an array of other business’ concerns.

Most part of the shadow banking system comprised of provident and pension funds (PPFs). 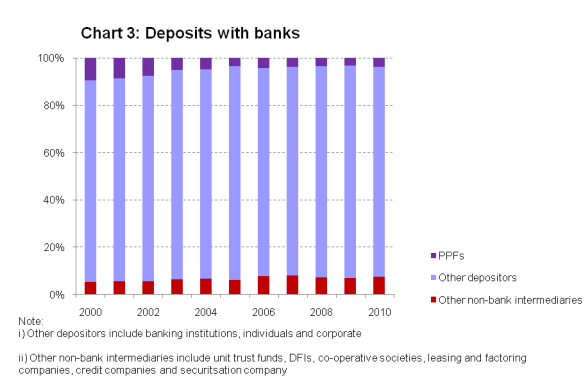 A simple regression analysis for assessing the impact of mass withdrawals of deposits on the bank’s liquidity revealed the following:

The results of the regression analysis revealed that, there would be minimal or no impact of mass withdrawals on the shadow banking system.

Quite a few attempts since the year 1933 by many commercial bankers of the United States, and regulators some times, to repeal exceptions to certain sections of the law which make separation of commercial and investment banking mandatory have not been victorious. As a consequence the United States and Japan which was obligatory to take up similar kind of laws after the Second World War legally necessitated this separation. Banks which offered investment banking services and mutual fund services were subject to the conflicts of interest and this thereby resulted in harm to the bank’s customers. Activities that include securities-trading are different to the way banking should be conducted.

Consequently the excess liquidity in the market united with the low interest rates permits banks and financial institutions to tap the areas where there is extremely high rate of return. The availability of easy credit due to a number of reasons and higher money inflow actually contributed to the housing bubble (See Figure II). Formally, the maximization problem faced by the representative ﬁrm can be written as:

In the above formula, Y indicates output, P represents the price of the good, W being the nominal wage, N indicating the amount of labor employed, iR is the oﬃcial rate that is charged by the central bank to the commercial bank, and LF being the nominal amount of loans that the bank allocates.

The production function can be denoted as under:

In the above formula, K0 denotes the start of the stock period of the physical capital, and αϵ. The financial constraint of the bank can be denoted as follows:

I in the above formula signify the real private investment.

Many different types of loans were easily available and the consumers in their usual rush contributed extensively to an unprecedented level of debt load. These financial innovations allowed investors globally to invest in the US housing market. As the housing prices began to tumble, major global institutions that had invested heavily into subprime started reporting extensive losses. Prices heading south only added to prices going below the mortgage loans thus making foreclosures look lucrative. The foreclosure rush drained wealth from consumers and contributed to erosion of banks.

The Dodd-Frank Act comprises various provisions that impact the largest financial institutions and also regional banks and community banks throughout the entire nation. As a result of this Act, the federal bank regulatory agencies and also the new Consumer Financial Protection Bureau along with the SEC will have more influence, control, and prudence to standardize and take charge of financial institutions. A few significant provisions of this Act that are created to remedy the recessionary period of the United States are: Forming the Financial Stability Oversight Council and the Office of Financial Research for overseeing the Federal Reserve holdings and simultaneously monitor the economy; Regulating the insolvency criteria of financial institutions; Reform bank regulation, including abolition of the Office of Thrift Supervision; lastly escalating the exposure requirements for investment advisers, and transforming the classification of an accredited financier.

One major reform that the above bill is planning to implement is concerning the sale of Mortgage Loans, which incidentally is believed to be one of the major causes for the recent US recession. Under this Act, the SEC and the federal banking agencies are required to institute “new regulations to require any issuer of an asset-backed security to retain five percent (5%) of the credit risk for any asset, including certain residential mortgage assets that the issuer transfers, sells or conveys to a third party.” The new regulations being proposed by the SEC and the federal banking agencies will forbid and issuer from either directly or indirectly hedging or transferring the credit risk that is mandated to be retained by the issuer. Henceforth, qualified residential mortgages will also have no exemption and the suitable banking regulators considering a plethora of factors prior to doing so would give the definition for qualified residential mortgages.

The Dodd-Frank Act is also planning to bring in new mortgage reforms and also introduce minimum lending standards in order for remedying the current scenario and also for being extremely cautious in future. According to the Act, it is mandatory to establish certain minimum standards for new mortgages. This would mean that, henceforth, the mortgage lenders are not allowed to make residential mortgage loans unless the lender makes a ‘reasonable and good faith determination’. Also the borrower’s repayment ability needs to be thoroughly checked and all relevant documents are to be verified. The Dodd-Frank Act offers a safe harbor pursuant with an assumption that the capacity to repay the loan exists if numerous conditions are fulfilled.

Tables 1 & 2 (see Appendices) show HC-s data form the second quarter of the year 2007, from the time it was mandated that BHCs disclose the securitization activity, till the fourth quarter of 2009, where BHCs were mandated to ruling 167 of the FASB (Financial Accounting Standards Board), making it mandatory to bring securitization assets to their balance sheets.

Chart 2 illustrates the sudden increase in total enhancements in the year 2009, attributable directly to enhancements in securitized credit card loans. These came because of sudden enhancements at Bank of America (BOA) and JP Morgan Chase (JPMC). The BOA increase was because of the purchase of securitization trusts of Meryl Lynch in 2009 and JPMC’s enhancement occurred as it issued notes of Chase Insurance Trust, which was a master trust of securitized credit card assets, among others. This shows how enhancements have been exploited to maintain a rating level by provision of buffers against collateral losses, which signals faith on the quality of assets.