In general, there are in total three sources relating to discrimination in the labor market. The very first source of discrimination is known as personal prejudice, which is the original work of Gary Becker. The prejudice theory connotes a subjective feeling of dislike for any individual or a group of individuals, which may be because of their appearances, speech or any other self-constructed reason. Thus, the prejudice theory believes that whatever are the sources, as per this theory, the person desires a distance from other person or group of person which the subject dislikes.

The second and third sources are statistical prejudgment and presence of non-competitive forces in the labor market.

Do you feel that you need some reflective essay assignment writing help? Contact Pro-Papers writing service, which is online 24/7, so you can receive your writings anytime you need them.

Gary Becker was the first person to originate with the idea of prejudice and in his theory. He applied Adam Smith’s approach of compensating variation to develop his elucidation of discrimination and the stress was done on the popular concept of ‘taste of discrimination’. According to Stewart Schwab, ‘taste models which developed by Gary Backer, include in the utility functions of employers, fellow workers or customers a desire to avoid members of certain groups. Which under such an approach. Discrimination cannot be characterized as either efficient or inefficient. However, on the other hand, one can compare the discrimination of income and utility with an economy where people do not have a taste for discrimination. But until one decides the moral question of whether furthering the taste is acceptable, one cannot begin to ask whether society’s resources are being placed in their most productive uses. (Palaz. 2008)

Gary Becker also commented that the economic approach will provide a lucid framework in understanding the human behavior and in particular will help in understand the reason for development of discrimination against women in the non-comparative labor markets. He asserted that if the individual has a taste of discrimination, he must act as if he is willing to pay something either directly or in the form of reduced income, to be associated with some other persons. Thus, because of this economic though, he describes the effective wage cost of employing female workers as a ‘’net wage rate’’.

According to the model proposed by Gar Becker, labor market carries the features of perfectly competitive market which allows free entry and exit for the employers and it assumes that the genders. i.e. men and women have the same skill sets and productivity capability. Thus, at the time of employment, employers do not consider the gender of the candidate and is more concerned with the productivity and skill sets of the candidate. However, the real scenario is completely different from what the model theory proposes. The reason is that employers generally prefer male employees and thus from here the discrimination factor starts for the women employees.

To explain this concept, Becker proposes discrimination coefficient (DC) and says that due to this coefficient employers do their preferences according to the benefit of male workers only. In other words, employers have a pre-determined prejudice for female workers and employing these female workers always bring them disutility.  Forming a mathematical expression for this situation, if the wages of male employees is denoted as WM, wages of female employee as WF and discrimination coefficient as ‘d’. The relationship established will be:

Thus, referring to the above formula. We can assert that the greater damage to the employers in respect to female workers will contribute in increasing the skill set and increasing the efficiency levels and thus decreasing the desire to hire female workers. Thus, in case of high value of discrimination coefficient. Employers will come up with psychology of not employing the discriminated workers i.e Female and hence with lower demand for female workers in the labor market leads to rescued market wage while the high demand and preference for non-discriminated workers will increase their market wages and from here the gender wage gap initiates. In simple words, the discrimination coefficient ‘d’ is the determinant of the percentage make up in the cost of hiring a female worker as this coefficient represents the employer’s psychology with disutility from employing female workers.

The second kind of prejudice was introduced by George J.Borjan which he called as Nepotismus.

As per this theory, an employer’s utility adjusted cost of hiring a non-discriminated/favored worker equals WF*(1-n) dollars. Here n is the nepotism coefficient and is a positive number. This coefficient automatically reduces the cost per worker. In general, there are the three ways of explanation of the occurrence of the discrimination coefficient in the personal prejudice. Even Gary Backer has generalized that there are three sources of discrimination for women and these three sources arise from none other than the majority group. The same are discussed hereunder:

Employer prejudices are considered among the prominent sources of discrimination against female workers and are most generally observed. For Instance, if in the labor market, two type of candidates/workers are introduced. i.e. male and female. Supposing that the employers have some prejudice for female workers. Now since women are on discriminated side of employment, there employment cost is reduced due to the subjective and psychological reasons and thus resulting in lower wages in comparison to male workers/non-discriminated workers.

Assuming, MRP represents Marginal Revenue Productivity for all the workers i.e Female and Male and ‘d’ indicates the coefficient of determination. However, the equilibrium stage for both the genders in the labor market is achieved at different point. For Instance, the equilibrium for men is achieved when their wages is equal to MRP. However, for female workers, the equilibrium is determined when MRP equates with Wages for Females + coefficient of determination (d). Both of these situations provide us with the following equations:

Wish to get all the financial support appointed for you, if you have a scholarship? Then, you have to write scholarship essay, which should be excellent and convincing. For that, you can apply to such scholarship essay writing service as Pro-Papers.

Thus. The above equations indicates that equilibrium for women in the labor market is achieved only when the expected wage for women is equal to the firm’s subjective value for them. Thus, the model proposes that the wages for females are less than the male counterparts. Hence, since the actual productivity of the female workers is devalued by the employers, they are forced to offer their services at rate lower than the male workforce. Again, this leads to gender wage gap where the female workforce has to compensate their employers by accepting lower wages (Autor. 2005). Although employers will be happy to hire women workers at lower wage rates but the firms cannot maximize their profits practicing this situation. The same is discusses graphically hereunder: 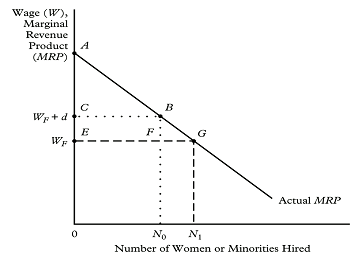 The second implication of employer prejudice is the measuring of the pay gap under employer discrimination. The concept is illustrated in the figure below where the vertical axis represents the ratio of relative wage between female and male workers. 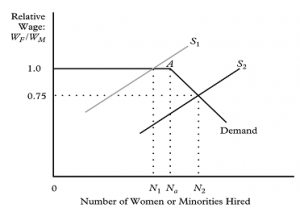 In the above diagram, The WF/WF=1   line represent that there is no discrimination in the labor market and it is the point where the wages of both the genders are equal and the coefficient of discrimination (d) = 0. The horizontal portion of the demand curve is a representation of labor demand by non-discriminating employers. If male and female workers are assumed to be equally productive, non-discriminating employers will be employing female workers whenever WF≤WM.

However, at point A, the demand from discriminating employers is arrived and thus the demand curve for labor starts bending. In other words, from the point A, we can witness that the amount of prejudice for female workers is increasing and the female workers are being employed at lower wages than their male counterparts. Now from the supply point of view, with the small number of female work force (S1) in relation to the demand, there will be no wage differential in the market non-discriminatory employers will be looking for such workers and they will be successfully hired by them. However, only in the case of higher work force of female (S2), there will arise a wage differential in both the genders because the extra work force will be hired by the discriminating employers.

However, according to the Backer’s model there are two factors which affect the amount of the wage differential between male and female workers. Only in this case, the supply curve of women has to remain fixed. The first factor graphically is illustrated in Figure 3: 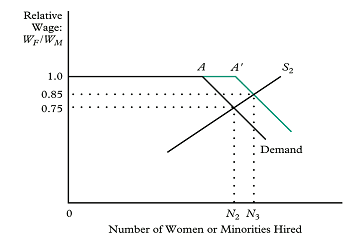 The second factor which affects the labor demand curve is when the number of discriminatory employers remains the same but their preference for discrimination is reduced. In such a way we can expect the rise in wages of female workers to be equal to rise in wages of male workers. Hence, the reduction of the discriminatory preferences after the kick point A becomes flat in relation to relative market demand. The effect is explained graphically hereunder: 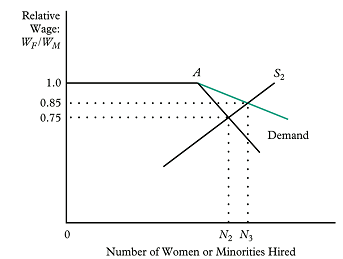 Thus, if we combine the three figures which we commented i.e Figure 2. 3 and 4, we can come to a conclusion that the first factor that can help in reducing the wage differential is by increasing the number of non-discriminatory employers in the market as by this way even female workers will be able to earn equal wage rates to male workers. The second factor that can contribute to narrow the wage differentials is by reducing the prejudice practiced by discriminating employers and if all of the above case, employer turns non-discriminatory then the demand curve will perfectly elastic and equal wages will prevail in the market regardless of gender of the worker.

Thus, by observing the employer’s discriminating model, we can infer that the discriminating employers satisfy their prejudice preference for male workers and in such behavior they let go the share of profits.

Employee discrimination is the second possibility of the market discrimination and is based on the personal prejudice of workers and is related to the supply side of the market and may occur by the majority of the group workers. Many eminent labor economists argue that the prejudice practiced by the workers is more powerful than the discrimination and prejudice practiced by the employers. This because of strong motives related to work environment i.e. employers rarely come in contact with their workforce and moreover discriminating and prejudice also cost them money. Hence the prejudice among workers is more dominating and is fueled by on the job factors like competition for jobs and their close personal contact at work.

For Instance, if we assume that the male workforce dislike their female counterparts working along with them. However, on the other hand. Female workforce is indifferent about the sex of their colleagues. Thus, the male workforce behaves as their net wages are reduced and they are just receiving very small portion of what they deserve in relation to their skill set.  Mathematically, this can be expressed as:

Looking for someone how would do a top-notch lab report for you? Buy lab report online at Pro-Papers, since it delivers the works of the best quality and done according to all the instructions provided.