In an another model proposed by Backer, he highlighted that even the involvement of female gender in the household activity is another source of discrimination as because of their involvement they are not able to show some significant efforts and thus. As a result wage discrimination occurs in the labor market.

Are you in urgent need of term paper help? Purchase term papers online at Pro-Papers at affordable prices. We create 100% unique content, just provide us with all the details, proceed with the payment, and we will do everything else.

A similar kind of explanation relating to as how the involvement of female gender in their household activities. Lead to gender wage gap, was explained by Balu and Kahn during 1999. They proposed the idea that the due to the role that women play in household activities, they are not able to provide non-continuous state in their working life and thus. This result in their low productivity and low wages in comparison to male workers.

Model proposed by Becker was grounded on the original idea that the existence of the function rigidly connected employer’s benefits. Profitableness and the number of male employees among the firm’s employees.  Thus, if the wage levels of both men and women are the same. an employer will only be able to maximize his utility by employing more of male workers. However, if there is any gap between wage levels amongst both the genders and if the wages of female workforce is lower than that of female workforce. Thus by increasing the number of male employees, the total profit of the employer will be reduced. However, this practice straight away leads to gender wage gap.

Another neoclassical human capital theory was cited by Anker and Richard. in which they proposed that the as per the neo-classical theory, a women will choose occupations which offer high starting pay, relatively low returns to experience, relatively low penalties for temporary withdrawal from the labor force and occupations which offer flexibility in terms of working hours. However, the economists (Anker and Richard. 1998) have cited some issues relating to this neo-classical human theory:

The increasing importance of female-headed households all over the world implies that more and more women need to work continuously in order to earn money;

The second theory related to gender wage gap is related to statistical discrimination theory. The theory was developed by Phelps Edmund Phelps (1972). Kenneth Arrow (1972) and Dennis Aigner – Glen Cain (1977). The Theory is related to inequality between the demographic groups based on stereotypes that do not arise from prejudice or racial and gender bias. (Andrea) In other words. This theory is different from the ‘taste of discrimination’ of Gary Becker. The statistical theory states that the employers in the labor market do not discriminate with the female workforce on the basis of gender or any other prejudice but because the employers believe that the hiring female workforce will not be profitable for them and thus they prefer to employ male workforce only. Moreover, various studies has conducted that the female workforce does not come up as perfect substitutes for male workforce and because of these factors, the wage gap between female and male workforce arises and that happens even in an non-discriminatory labor market.(Palaz. 2012)

Thus, the core concepts of statistical discrimination theory are completely different from the theory of taste of discrimination’’. This theory claims that the inequality may occur even in non-discriminatory labor market and also in the absence of personal prejudice from any section of the society i.e employer, employee or customers. The theory is termed as Statistical because stereotypes may be based on the discriminated group’s average behavior. (Statistical Behavior). Thus, as per this theory. In the world of incomplete information. Discrimination in the labor market arises as a result of processes adopted in assess of the firms' potential labour force properties (Elliott. 1997. page 393). The most noteworthy difference in this theory is that it proposes the idea that discrimination in the labor market is based on imperfect substitution between female and male workforce rather than any prejudice or preference of the employers. Employees or customers. There are two source of statistical discrimination:

Before we begin with explaining this source of discrimination in the labor market. The statistical model carries the basic assumption that the productivity of female workers is always less than that of male workers. On an average.

The topic of unequal productivity will discuss only the case of investment in the human capital. In other words. The factor of unequal productivity suggest that if both male and females invest to the same extent. The theory of human capital suggest that there will be no wage difference. however. At the time of their hiring. Employers are not aware about the productivity factor for each gender and they just rely on the fact of statistical average. The diagram and mathematical expressions will help us understand this relation in a better way:

The graphical illustration above describes that the mean level of productivity of women is less than the male workers. Where respectively they marked by β and α (β<α). Thus. Men’s individual productivity fluctuates as following:

And accordingly for women. This will be interpreted as following:

Where ui represents the distance between the men/women average productivities and i-th individual’s (respectively men or women) productivity. Thus, on these assumptions, there is no discrimination against the women. However. There may be discrimination against individual women. and specifically those females that have a productivity level to the right of point C in the diagram and they are the one who are being paid lower wages in comparison to the male counterparts. However. There are several reasons for occurrence of two different frequency plots. But the most significant reasons occurs due to the investment in education. Training and particularly the women's interrupted work careers. Thus. Each of the previously discussed factors have an effect on the slope. In other words. Better training and education for male workforce helps them in promotion at the work place and thus increased wages and fast growth in the career ladder and thus the subsequent gender wage discrimination takes place.  This case is illustrated as age-earnings profiles of men and women in the figure below: 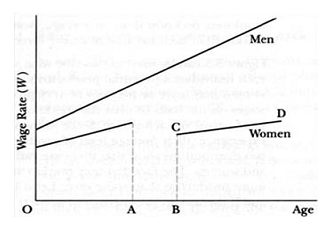 The above figure indicates that the age-earning profiles of women up to the age A are steeper than the period after the maternity interruption.  It explains that the up to an age. A period women who is making investment on her training and education and thus they attain a good opportunity to promote in their career avenues. However. After the return from the maternity to the labor. Women are forced to start again from the low wages. This is because. Women receive less training than men. Which leads to lower rate in their wages. In addition. The interruption between period age and after the maternity. Has added to the depression and frustration of the women has also resulted as hurdle in their earnings growth further and also loss to their seniority positions in the firm. Which is shown by the segment CD in the above diagram. Hence. Statistical discrimination has a high possibility to lead to unequal earnings among individual workers of similar productivity standards possibly because of their group affiliations.

Another source of statistical discrimination that is related to productivity reason is equal productivity. It occurs because of the following two conditions:

Second, the high prevalence of risk-aversion behavior in the employers. Who don’t want to take any kind of productivity risk by hiring women workforce? Thus, this pre-determined psychological behavior of employer in relation to employment of women employees creates a vicious circle in the labor market as by not hiring women workforce with same attitude as for men, these employers perpetuates the uncertainty relating to productivity of women workforce. The same concept can also be explained with the help of the following diagram: 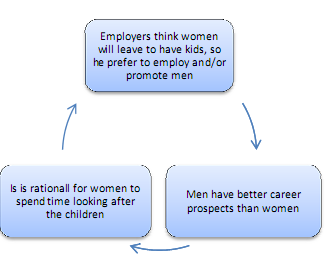