The household debt increased dramatically and finally there was a collapse in the subprime crisis. There was immense research that was carried over by researchers across the world, trying to correlate macro-economic factors as well as the household consumer debt and such research was confined predominantly to Central and Eastern Europe. This was due to the accelerated and rapid growth in consumer debt as well as rapid economic growth and betterment and hence leading to a kind of a convergence of the financial system. In this scenario, Croatia was found to be special because of very high levels of household consumer indebtedness in the mid-2000s itself (Šošić, 2010). Having said so, it is to be noted that the Croatian household consumer indebtedness actually doubled between 2005 and 2008, which brought it to the top among the Central and Eastern European countries (Šošić, 2010). This kind of a debt growth actually allowed the release of the release of financial constraints on the households and the entire assumption for this indebtedness was based on the premise of constantly growing income rate. However, it raised certain serious issues on what could be the implications of immense household consumer over-indebtedness and its relation to the financial system. This was explained at that time, as the process of catching up with the average rate. This particular study concluded that the debt determination techniques can be extended to the analysis of wage gaps for capturing risks that are related to household consumer lending. There was an argument that it has certain advantages in capturing household consumer vulnerability to quick and rapid changes over some of the earlier methods used.

Are you tired of lots of homework at college and looking for help? Then we got a super offer for you! Apply to Pro-Papers to get a professional college assignment help and go breathe some fresh air.

In another study which focused on studying a typical Japanese household concluded that a balance sheet of a typical Japanese household is rather conservative when compared to industrial economies. In Japan, cash and deposits represent about 50% of the financial assets, while on the contrary, in United States this is about 16% and in Europe the same ranges between 25 to 33% (Yasui, 2008). Despite the fact that, almost all the financial instruments are well-developed and traded immensely in Japan also, the household consumer preferred deposits and other liquidity assets primarily because of three reasons.

1. Significant part of Japanese households needs substantial payments to be made to procure a house and hence they avoid risky investments in stocks. 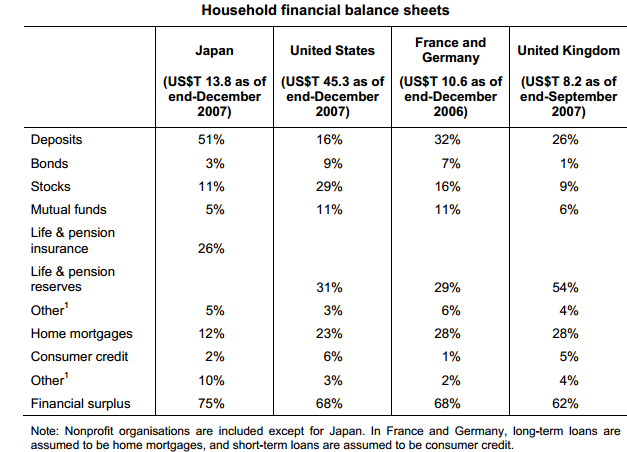 2. Almost all the senior citizens in Japan, who hold majority of bank deposits, were influenced in their younger age that savings and bank deposits are the best.

3. There is no argument in favor of investment in risky assets.

In its 2012 global outlook report, IMF presented the much debated topic of whether household debt strengthens the economic downturn or weakens the recoveries. In its report, the IMF stated that, housing busts and recessions preceded by larger run-ups in household debt tend to be more severe and protracted and this conclusion was arrived at by conducting an analysis of advanced economies over the three decades prior to 2012. It was observed that, Household debt rose in the years that led to the Great Recession. In developed nations, during the half-a decade prior to 2007, the ratio of household debt to income increased to an average rate of 39% age points to a surprising figure of 138% (International Monetary Fund (IMF), 2012).

“In countries like Denmark, Iceland, Ireland, the Netherlands, and Norway, debt peaked at more than 200 percent of household income. A surge in household debt to historic highs also occurred in emerging economies such as Estonia, Hungary, Latvia, and Lithuania (International Monetary Fund (IMF), 2012).” The simultaneous roar in both the house prices as well as the stock market implied that household debt in relation to assets held extensively stable, which concealed households’ increasing exposure to a steep fall in the prices of the assets. This fact is indicated clearly in the above graph.

When house prices dropped, ushering in the global financial crunch, numerous households experienced a shrink in their assets against their debt, and, with decreased income and increased unemployment, were finding it difficult to meet the mortgage payments. “By the end of 2011, real house prices had fallen from their peak by about 41 per cent in Ireland, 29 per cent in Iceland, 23 per cent in Spain and the United States, and 21 per cent in Denmark (International Monetary Fund (IMF), 2012).”

The other findings of the study conducted by IMF were as follows:

Likewise, the study of IMF concluded that Targeted Debt Restructuring policies can yield significant results as such policies can considerably alleviate the negative impact of the household de-leveraging on the economic activity at a relatively lesser cost. To be precise, bold household restructuring programs which were conducted in the United States in the late 1930s and that are evident in Iceland currently are believed to help in decreased household defaults as well as foreclosures of loans, while alleviating the burdens of debt repayments (International Monetary Fund (IMF), 2012).

A study similar to the above was conducted by Allan Crawford and Umar Faruqui focusing on Canadian household market. The authors, in this particular study, explored the trends in the household debt in Canadian markets. It was observed that household indebtedness increased significantly in several advanced nations in the recent few decades. This ascendant trend increased in the years prior the recent financial downturn as proportions of household debt to disposable income increased sharply in quite of a few advanced economies.

For instance, in the case of the United States and United Kingdom, increased easing in the condition related to lending, resulted in unsustainable increase in the quantum of household debt and this eventually fueled increased debt-service burdens as well as house prices (Faruqui, 2012). Following the inception of the crisis, burdens for deleveraging in both the banking as well as the household segments resulted in significant decrease in the debt ratios in these economies. It was observed that household borrowing in Canada has trailed less-pronounced blows than in a few other nations in recent past, however, has yet maintained a stable ascendant trend. In addition, credit growth has remained strong in the past decade while even the “ratio of debt to disposable income for Canadian households has now risen to approximately 150 per cent (Faruqui, 2012).”

Prior to the mid-1990s, the growth in the debt-to-income ratio was largely driven by the credit to residential mortgage, but since that period, consumer credit has also become a key driver to the debt-to-income ratio growth. The growing significance of consumer credit has corresponded with a strong upsurge in non-mortgage borrowing shielded by housing assets.

The observations and findings of the above study were that, measures of household indebtedness in Canada, like in many other global economies, have indicated an upward trend over the past three decades or so. The findings of the data analysis of this particular study of the Canadian household market indicated that, population aging to have had a moderating effect on the overall growth in the credit since the 1990s; however, this influence looked more than offset due to a likely strong cohort effect.

As already mentioned earlier, household debt has garnered immense attention in the academic and also the policy debate since the beginning of the earliest financial crises that had occurred. The build-up of household debt has time and again been regarded as one of the major disparities which, in due course, believed to have triggered the crisis. Moreover, the deleveraging which was triggered by the crisis also shaped the economic performance of numerous developed economies. In the study conducted by Dimitris Christelis, et. al. that compared household debt across 11 different countries including the United States and various European nations, significant amount of heterogeneity was apparent (Dimitris Christelis, 201). Yet, such a comparison needs to take into consideration that, household characteristics along with the economic environment vary between nations. Given the significance of household debt for the macro economy as well as for the economic stability, it is fascinating to note that household debt holdings substantially differ, both at the extensive and the intensive margin across various nations. The authors of this study concluded that, the economic conditions in the United States have been greatly conducive to taking out debt when compared to the nations in the Euro area. In addition, for a given level of real wealth, the America households are considerably more likely to hold collateralized debt than the households in the European nations. Lastly, the economic environment of the United States has also largely been more advantageous to assuming greater debts, even though the significant increase in house prices observed in some European countries have also been supporting the take-out of huge mortgages therein (Dimitris Christelis, 201).

The statistical data shows that in all analyzed countries a rapid increase in consumer credits took place. However, the most significant jump was observed in Anglo-Saxons countries. Meanwhile, at some point Sweden had reached the highest level of taken credits, after which the overall indebtedness began to decrease in order to reduce the owned amount of money by households. In addition to this, the European regulation was examined in the study, and the main its purposes were the customer protection against the wrong information not to be deceived and harmonization of the information in order to create free movement of goods and services financed by credit money. For estimation the cost of credit all the analyzed countries by the end of 1980s has chosen the APR approach (annual percentage rate of charge). The legislation provides the elements, which are included in the calculation process. Finally, in 1998 the unique mathematical form was established. Unfortunately, the development of the market occurs in a very slow manner, despite its orientation on customer. The regulatory processes are provided by the governments through the harmonization of contracts; however it has little impact, especially when credit institutions supply electronic services it begins too hard to regulate the market.

The country with the peoples surveyed is important factor due to the present of the data separation in other ways doesn’t achieve the format so these data play an important role in the consideration of the other values.