We tried to include as many explanatory variables as possible. Some had to be eliminated due to severe missing data problem, as referred to above. The final model selected was the following:

The variables are from among those detailed in Table 1 in the Appendix. The agesq (=age^2) term, common in the literature, is included to avoid unrealistic monotonic age effects.

The results are presented below:

Wonder if there someone willing to write my term paper for me in this world? Visit Pro-Papers writing service and there you'll surely find the professional writer that will take care of your paper. 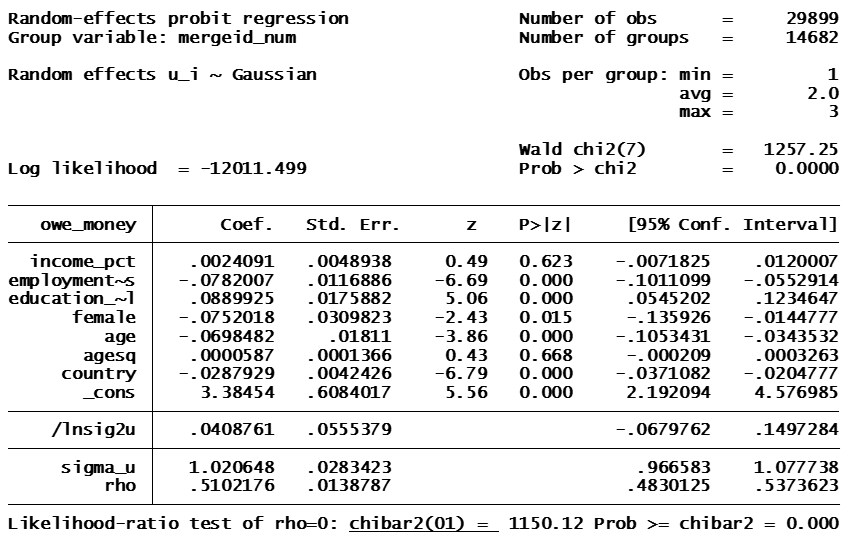 The overall significance of the regression is shown by the Wald test statistic, and the Prob > chi2 - This is the probability of obtaining the chi-square statistic given that the null hypothesis is true. In other words, this is the probability of obtaining this chi-square statistic (1257.25) if there is in fact no effect of the independent variables, taken together, on the dependent variable. This is, of course, the p-value, which is compared to a critical value, perhaps .05 or .01 to determine if the overall model is statistically significant. In this case, the p-value is reported as 0, so the overall model IS statistically significant

Further, the model gives us highly significant estimates of coefficients for almost all the independent variables, the only exception being income_pct.

The chi-squared test on the estimated rho indicates that the true rho is NOT zero, nor does it seem likely to be 1, since the confidence interval does not include 1. Hence, while, RE is superior to a Pooled Regression, the estimated b's will be likely to be somewhat biased, due to unobserved heterogeneity.

Coefficients: As explained earlier, the Probit coefficients are a bit difficult to interpret - but they do indicate the directions and size of effect of each variable on the probability of the independent variable. Thus income (weakly) & education (strongly) have a positive effect on the propensity to borrow.

The other independent vars. have negative effects:

female=1, male=0, so the negative sign means that men are less likely to be borrowers.

The other effects are quiet are difficult to interpret, since they refer to factor variables, i.e., categories, such as employment & country. It is easier to see the meaning if we obtain explicit parameters for the factor levels. This is done in the following modified regression:

Here i.employment_status, i.education_level, i.female, and i.country are Factor variables- one dummy variable is calculated by Stata for each level of the variable, except one, the base level. So there are 6 dummy variables for the 7 countries (country=12 (Germany) is the base level), 1 for female (gender), 3 for the 4 categories of education_level, 4 for the 5 categories of employment_status 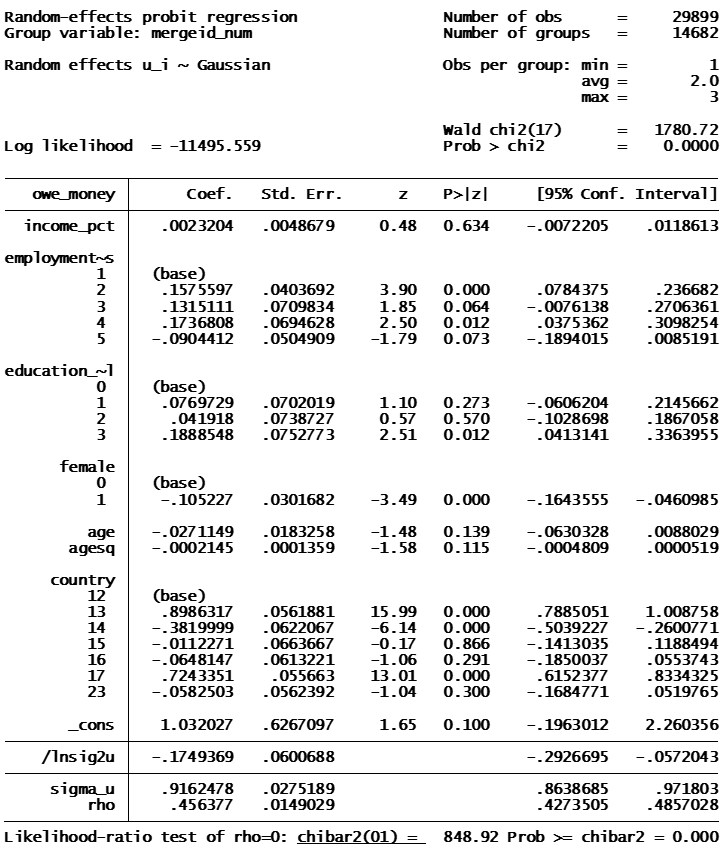 To interpret the coefficients, we need to know the value codes used, and they are given in the Table below.

Hence, we can say that for given values all other independent variables, as compared to a retired person, the employed are somewhat likely to borrow more, the unemployed a little less so, the disabled much more, and homemakers less.

As mentioned earlier, the regression coefficients, while they establish the direction of the relationship, the Probit regression coefficients cannot be interpreted in terms of actual changes in probability of borrowing. This can be seen from the Marginal Probabilities. These are the probabilities of borrowing calculated for each level of a categorical variable, given all other variables at their mean levels. They are given below.

So, as indicated by the regression coefficients, compared to individuals in Germany (who have an average 5% probability of being a borrower), those in Sweden(13) with 22% & France (17) with 17% are more likely to borrow, while those in Netherlands, Spain & Italy have much lower probabilities of borrowing.

Here we see that the Retired on average have a 6.4% probability of borrowing, the Employed, 8.6% etc. Surprisingly perhaps, the highest probability is for the Disabled. Homemakers, not surprisingly, have the lowest probability

So, as expected from the discussion earlier, Females (code=1) are less likely to borrow than males (0),the respective probabilities being 6.3% & 7.7%

Similarly, for given values all other independent variables, compared to those with no education (code=0), all the other categories are more likely to borrow, with the highest education category having the highest probability- 8.33%.

The above probabilities are computed for the entire sample of all 3 waves. It would be interesting to see how the patterns may have changed over the waves. For the country-level probabilities, and employment categories, this is shown by the following graphs: 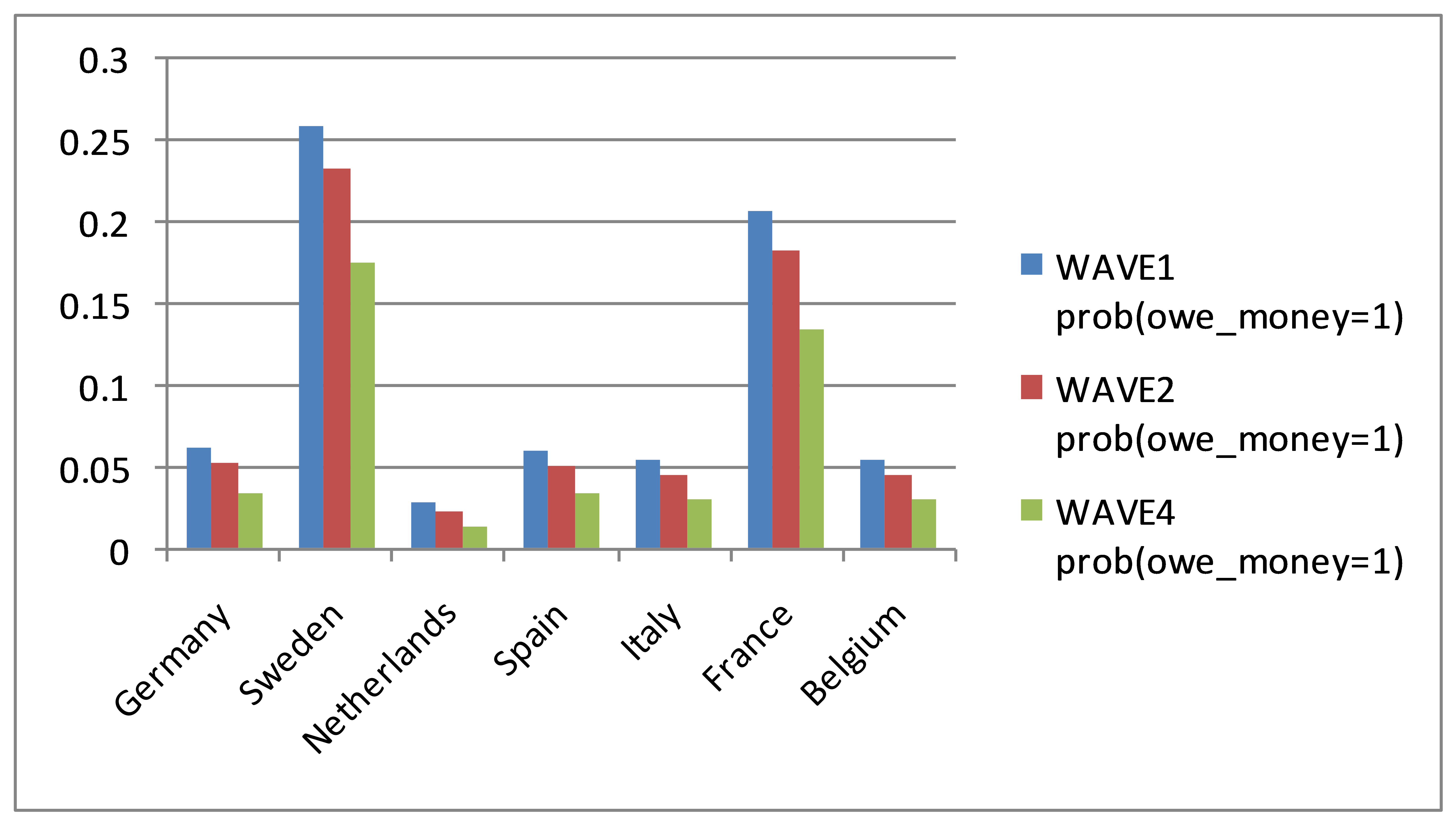 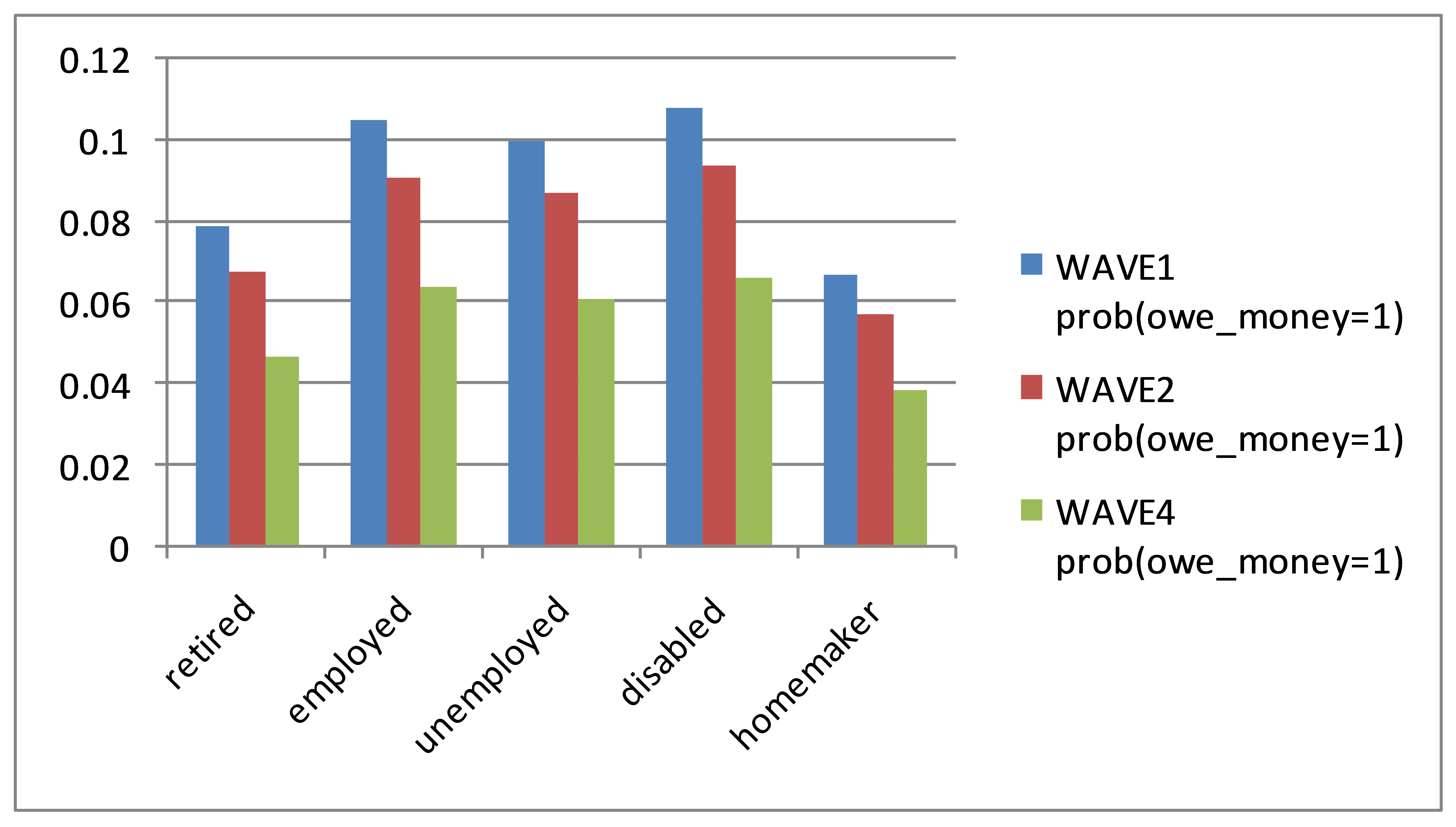 From a marketing perspective, it would be logical for the providers of consumer credit to target women, educated youth up to and beyond college levels without any disabilities. Another category would be the younger population with education as well as disabilities. The third possible category is people with disabilities. These three categories of people seem to have consumed greater amount of credit over the last two decades or so and it can be safely concluded that there would be sufficient growth in these sectors.

A very interesting phenomenon is that the senior citizens seem to be shying away from consumer credit, possibly because of lower income levels; however, there is no sufficient data to conclude on this. Consumer credit has been an interesting product that has found and made deeper in-roads into the consumer population across the European Union and tends to now compete with other mortgage products available and it is obvious that consumer credit has found greater utilization in the European economies in the last two and half decades.