In this descriptive case study the table below is a summary of the processes and the way they apply to the audits that are performed on a regular basis by the central functions team. The reader will notice that not every process step as described in the literature review, forms part of the audit. Systematic probability sampling is used in order to audit only items that have the most significant amount of impact on the business. It should also be noted that the audit criteria changes along with the focus of the organisation; hence, certain focus areas are assigned greater weight in calculations. Walker, D., Walker, T. and Schmitz (2003:28) elaborate on this changing focus area by saying that: “To be successful in the global business environment, organisations must thus constantly adjust their focus to changing realities.” The sections following this summary table will reflect on data and audit results as they pertain to each of the disciplines.

Does “critical thinking in academic writing” sounds terrifying to you, though you have to perform this task anyways? So why don’t you consider trying custom writing services from professionals like the Pro-Papers?

Five process areas are listed in table 4.7. Data is available on each of the disciplines and will be discussed in the following sections. The reader will notice that PROPS-C, which is the first discipline to be reviewed, covers a great majority of activities being audited. Therefore, activities being audited in the following process areas will not be discussed and evaluated again if they are already rated in the PROPS-C audits. This method will apply to all disciplines in order to avoid duplication of effort.

Table 4.7 A representation of processes forming part of the audit criteria (Source: Own source, 2007).

Data gathered for auditing purposes in support of PROPS-C compliance is as follows:

In the following section, sixteen audit measurements based upon the data gathered are defined and discussed, as well as certain measurements are weighted. Measurements without a weight rating are performed as check of compliance, meaning that the business needs at the time do not require emphasis on these measurements. The ones with weight assigned to them form part of the organisation’s focus areas of improvement. By adding a weight to the measure, the Project Manager experiences a greater impact on their added benefits received. Nineteen assigned weights are available in total and they change in accordance with business needs and focus areas. In the definitions supplied, the notation ‘(W)’ is used, followed by a numeric number at the end of the sentence. This is to indicate which measurements have a weight assigned.

Audit results recorded in support of PROPS-C compliance are reflected in the figures below. Calculations are based on the following Likert scale in terms of the level of compliance with the sixteen measurements above:

A total of four figures are displayed below, which are grouped in sets of two. The first set of figures (Figure 4.7 and Figure 4.8) reflects project results without any weights against any of the measurements. The second set of figures (Figure 4.9 and Figure 4.10) has the weight applied as described in the measurement definitions above. The purpose of this comparison is to show that un-weighted scores reflect compliance, while weighted scores reflect maturity as perceived by the organisation.

Audits are performed throughout the life cycle of the project; therefore, not all projects reached the end of their life cycle before data is captured. This is evident in the results displayed for the two Project Offices respectively in the figures below.

Figure 4.7 displays twenty seven projects governed by the Nigerian Project Office that were audited. All twenty seven projects passed TG2, while five of them passed TG3, only one passed TG4 and TG5. The 100% compliance displayed against handover to the customer, handover to the line organisation, project review, TG5, project evaluation, final report, as well as 100% non-compliance displayed for TG4 that pertains to one single project, as this is the only project that reached the end of its life cycle at the time of data capture. This data is weightless.

While analysing the results obtained for projects that passed TG2 and TG3, it appears that the level of non-compliance reaches its maximum at 30%, which represents measurement 3 that is based on a ‘Project Specification’ being created by the Project Manager and submitted for approval to the sponsor at or before TG2. The impact of a Project Manager not having a Project Specification means that vital information pertaining to the delivery of the project is not available to the team. Delivery quality is impacted negatively; frustration and confusion could be a result of such an omission.

Do you need to write your paper in formal business report format but you have never come across a case like that? Don’t worry, here we propose a wonderful option to buy your report at trustworthy paper writing service.

In Table 4.8 the frequency of responses from participants in the Nigerian Project Office are represented as it appears on the Likert scale.

As a result of analysis of the data of projects that passed TG2 and TG3 it was found that a large number of projects have full compliance. It can be said that the Project Managers in this Project Office are familiar with processes and procedures within their unit. The effect is a greater sense of trust and efficiency among participants of the Project Office. One cause for concern is a high percentage of non-compliance pertaining to measurement 2, which is performed in order to see if the ‘Assignment Specification’ is received as a handover from the planning phase before TG2. It means that the handover from the pre-sales team towards the delivery team requires some attention. Possible effects could include, but are not limited to the delivery of the project not being in line with the initial sale to the customer. This could impact customer satisfaction, as well as render the organisation with a sense of unprofessionalism.

Projects that pass TG4 and 5 reflect an overall high level of consistent compliance. In addition the Project Manager has the ability to see the benefits of compliance and its impact throughout the lifecycle of the project. Less conflict is experienced as a result of all team members having clear direction in the project, as well as a sense of team spirit when similar processes and procedures are utilised by everyone.

Table 4.9 reflects the frequency of responses summated, as per the Likert scale indicated. These numerical values are then converted into percentages as displayed in Figure 4.8.

The following set of figures (Figure 4.9 and Figure 4.10) have weights applied to measurements 2 through 7, 11, 12, 13, 15 and 16 in accordance with the organisational focus areas. The purpose of applying a weight to a score is to highlight some measures over others on the basis of the importance that a particular measurement holds for the organisation. With weights applied, it can be seen that multiple measurements exceed 100%, which is perfectly acceptable seeing that it is not the level of compliance that is reflected in a weighted figure, but rather the performance contributing towards organisational goals. It is observed that the result of such a weighted measure is amplified in order to visually stimulate maximum effect.

Table 4.10 represents the same data as Figure 4.9, which is displayed as summations of response frequency as opposed to percentages on the bar chart.

With 19 weights applied, the scores captured for the Nigerian Project Office reflect that hand-over to the internal line organisation, as well as the project evaluation scores are both at 183%, indicating a mature organisation in the handover and close out phase of the project life cycle. Hand-over to the customer has the next highest score of 137%, which again is in line with the organisation’s focus area with a weight of 2 applied.

The absence of Assignment Specification implies that there is a disconnection between pre-sales activity and project delivery when referencing the non-compliance scale. The risk factor increases as the disconnection could have a direct impact on the project's bottom line. It is possible that the pre-sales team performed a proper handover to the project delivery team, however this is not documented and, therefore, such occurrences will not be taken into account. This deduction can be made due to the percentages captured for TG2 as well as the Project Specification. The TG2 meeting input requires allotting of input that can only be obtained from the pre-sales team. The same could be said about the Project Specification, as it is a very detailed document, in which all the contract stipulations, acceptance criteria, margins and such like are depicted. Without a handover from the pre-sales team, the Project Manager would not have access to this data that is needed in order to complete the Project Specification. The nature of audits is such that proof is required in order to capture any score; therefore, deductions can be made on the basis of alternative data, however, it will not change the score. 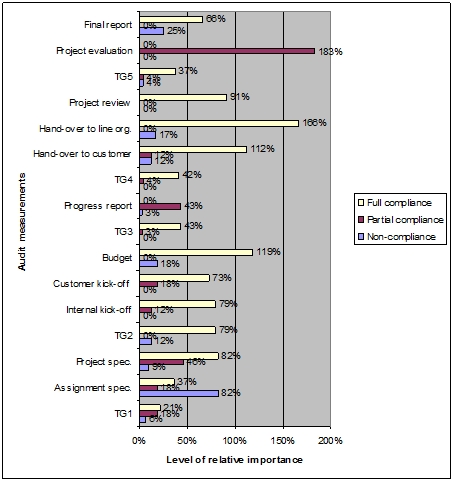 In table 4.12 below a comparison is drawn between the respective Project Offices. Weights are listed from the highest to the lowest with their respective description shown. The column labelled ‘Compliance’ indicates the un-weighted score, while the column labelled ‘Maturity’ reflects the score once its respective weight is applied.

Is writing in exploratory essay format too hard assignment for you and you are looking for someone to do it for you? Well, no need to seek further, Pro-Papers is always here to cover your back! Contact us to buy your paper today.

While it is known that implementation of the PROPS-C model is more established in the South African Project Office, it would appear that the Nigerian Project Office’s highest compliancy scores are in line with the organisational focus areas. Within the confines of limitations, as well as de-limitations, as stated within this research, the Nigerian Project Office seems to be more mature. The only areas where the South African Project Office appears to be more mature are Budget, TG2 and Internal kick-off meetings being held with the project team. The results reflect the variance in the level of process application as evidence of non-standardisation.

Table 4.12 A comparison between weighted and un-weighted scores for both Project Offices (Source: Own source, 2011).

It can be said that audit results without weights applied reflect the true compliance of processes and procedures. Weighted measures are not the correct method to use when compliance levels are sought. It can be disputed though that the level of maturity could be determined from a weighted result, as it could reflect the Project Manager’s ability to perform above average if weighted measures score over 80%.