The importance of service quality towards customer service satisfaction when commuting in Klang Valley, Malaysia - Part 6

QOS or the quality of service can impact the user choices particularly in terms of satisfaction. For that reason, improving the ridership and to attract new users, service quality is regarded as one of the measures for continuous development. User satisfaction is referred to a measure for the services quality based on the customer’s perspective. The customers or in this case the commuters of KTM train service express their opinion about the services provided by train company through judgments and perceptions on some service aspects using a sample survey. The objective of this study is primarily to provide measures of the overall transit service quality with consideration to the rider’s perception about the different aspects of the service.

Do you feel difficulties understanding how to compose a bluebook working paper? If you have no time to find out what is Bluebook format and learn how to cite according to it, feel free to address our professionals for help!

The services aspect focuses mainly on service reliability, characteristics, and comfort of ridership, fare, cleanliness, safety, information, and security. As a whole, there supposed to be sixteen attributes with average satisfaction of 3.45 based on a scale of 1 to 5, one being the lowest and 5 being the highest. According to the rating scale from 1 to 5, the important attributes demonstrating the highest satisfaction score encompasses high satisfaction rate, which includes, convenience of ticket purchase. Overall satisfaction level showing a mean score of 4.16 or higher is considered as a high probability of service satisfaction. The less satisfaction is identified with mean lower than 2.36. Determining the overall value of satisfaction is 3.00 out of 5. By means of converting the aforementioned scores into percentage, the results of the analysis shows that the services provided by KTM is about 58% successful in delivering commuter satisfaction. However, before the determination of the overall satisfaction, commuter demographics and frequencies of activity was first measured.

Based on the results of the survey commuters prefer to purchase their ticket using the vending machine, which accounts to 56.5% or 113 out of 200 out of the 200 total responses from the participants. This means that participants appreciate having more vending machines in place in every station instead of standing in long lines at the ticket booth. The graph (Figure 3) shows the large in terms of preference on ticket purchase method. Customer satisfaction, in this regard shows that a significant percentage of commuters are still purchasing their tickets through ticket counters or with the use of Touch N Go Card buy their way into the train platform. In addition, the satisfaction rate is compromised by the fact that there are limited vending machines in the stations to accommodate purchases because 21.5% of the commuters are still getting their tickets from the ticket counter. 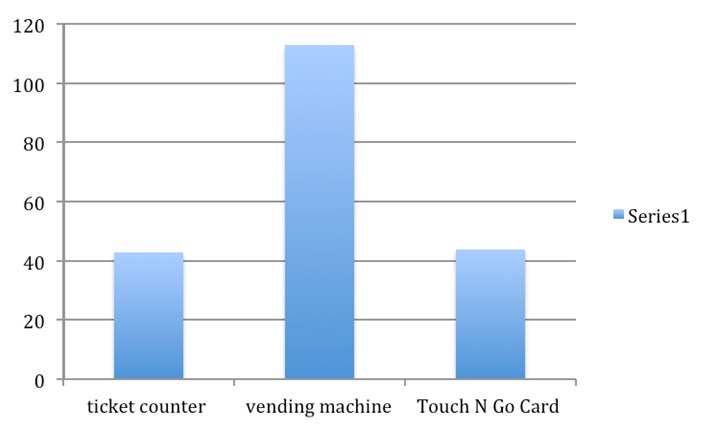 In terms of reason to travel by train, the majority of the participants show that the train service is being as means of transport to go to work with 37.5% of the participants stipulating the said reason. On the other hand, education appears to come next after travel to work as the second most popular reason for commuters in riding the train at 27.5%

The graph below shows the difference in reasons to travel via the railway with an indication that rail transit is not a preferred mode of transportation for most Klang valley residents in terms of personal and social and family visits. Klang Valley has multiple train agencies operating to provide mass transport for the people particularly to those that in need of connecting transit. 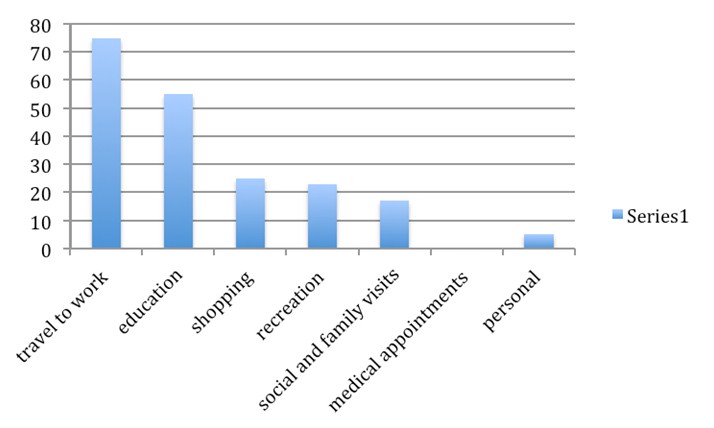 The data below suggests the method of transportation that the people in Klang Valley is using to get to the KTM station. The most popular mode of transport in getting to the train station is trough anther train service, which encompasses a 33.5 percentage out of the 200 samples participants.

People with their own vehicles use the train service to get to their destination due to reasons specified in Table 3. However, the majority of commuters riding KTM trains are mostly those who came from another train. 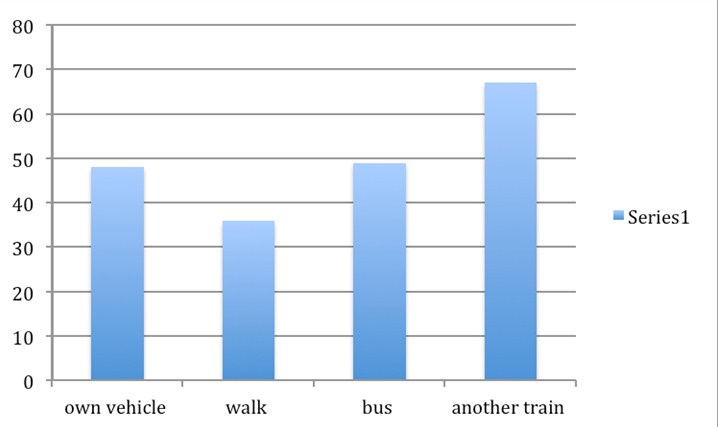 Since it was mentioned that commuters use the train service for transport is to go to either work or to school, the frequency of travel was also determined to point out how often people ride the train on a regular basis. The data shows that 70% of the participants are using the train service at least four times a week at 70% while the rest of the commuters travel by KTM trains at least once to three days a week at 29%.

Figure 6 Frequency of travel by train

The commuter satisfaction rate reflects the ratio in terms of gender wherein 62% of commuters are mostly females. Whereas, the male passengers only accounts to more that half of the percentage of female commuters. 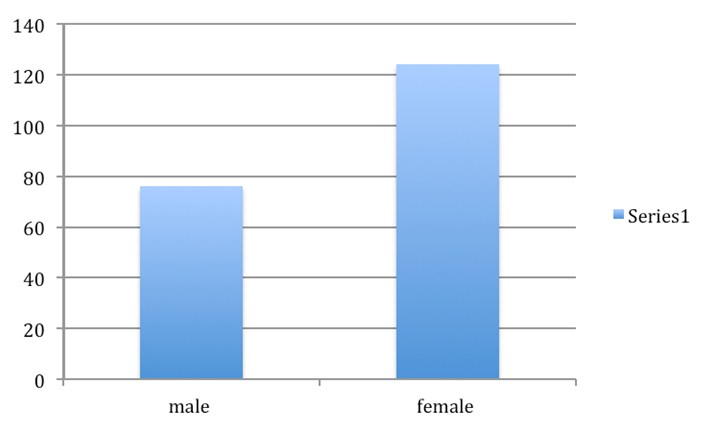 On the other hand, the majority of commuters by age are mostly individuals between the age of 19 to 24 tears old, which makes up 29.5% of the total number of surveyed participants. People at the age of 16 to 18 years comes next as the frequent users of the train service, which are mostly students.

In terms of employment, 34% of the participants are full-time employees, which justifies the high percentage of user as workers. Part-time employees on the other hand are also using the train service, but there is a 9% gap betwee n the two types of employees that frequents the railway stations of KTM.

Without a doubt, doing a thorough research is a great part of college writing. If you can’t write marketing article review assignment due to some reasons, Pro-Papers can always lend you a helping hand.

When it comes to cleanliness, the survey suggests that 62% of the participants are generally satisfied about the cleanliness of the trains. Whereas, the total percentage of dissatisfied participants are accounted to 23% of total sampled population. This encompasses a positive perception about the quality of service that KTM demonstrates in terms of keeping their facilities clean.

Information dissemination is also an important part of the train operation’s commitment to service quality. Interruptions in service or delays are usually communicated to the commuters to inform them of the anticipated inconveniences. However, KTM showed an alarming rate of dissatisfaction expressed by the participants in terms of communicating information to the commuters. The data below reveals that 56.9% of the participants are not satisfied about the efforts of KTM in effectively initiating information updates. A large between the satisfied and dissatisfied commuters can be observed from the data as only 28.5% of the participants showed satisfaction. Furthermore, the data shows that the satisfied commuters are only half of the dissatisfied commuters, which encompasses an alarming situation for KTM.

In terms of comfort, 43.2% of the participants are comfortable enough when commuting while only 21.9% showed dissatisfaction about the comfort aspect of service when commuting in KTM trains.

Ticketing preference was already measured in Table 1, but it is still important to determine how satisfied are the commuters in terms of purchasing their tickets. The survey shows a positive response towards this aspect of service wherein 58% of the participants expressed overall satisfaction toward the ease of ticketing. This can be attributed to the convenience that commuters are experiencing in buying their tickets through the vending machine, which encompasses the highest preferences between the three ticketing options. However, there are still 28% of commuters that are not satisfied about the ease of ticket purchase. This percentage can be attributed to the number of individuals that uses the other two ticketing options namely through ticket counters and Touch N Go Cards.

A similar positive response was obtained from the participants with regards to train safety. This includes the perception of safe travel to and from the train station and when inside the train. An impressive 67% of the participants felt safe riding the KTM trains as opposed to 28.5% of the participants that do not feel safe commuting via train. Only 5.5% of the participants showed neutrality in this aspect of service quality. Safety concerns are among the most critical aspect of service quality delivery in the mass transportation section particularly in the railway sector due to the possible hazards that commuters might be encounter while commuting. The statistical test of train safety reveals a mean score of 42.25, which demonstrates a favorable output on the part of KTM. However, percentage of unsatisfied commuters may not be ignored considering its variance from satisfaction perception of only 22%. 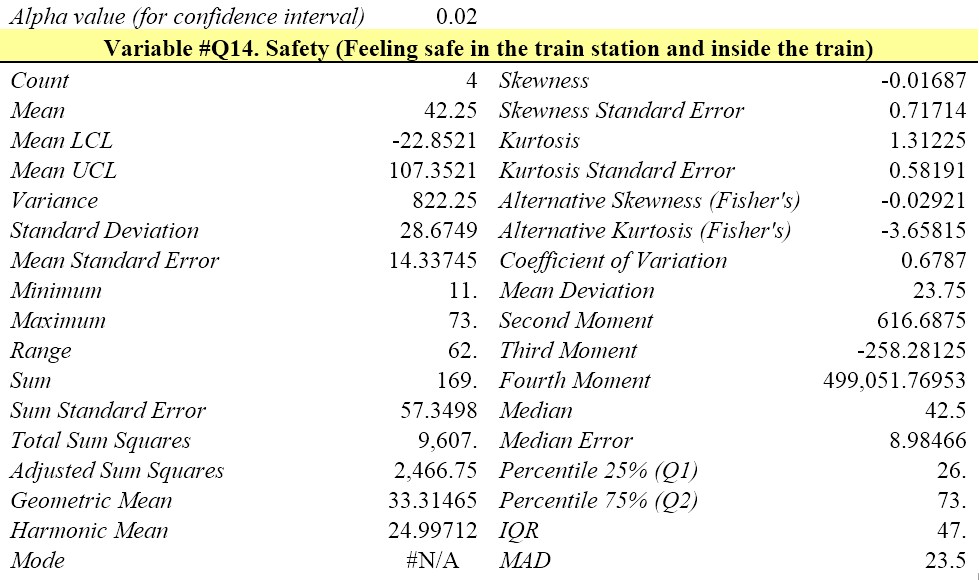 Similarly, the convenience aspect of service entailed in relation to commuters’ response is at 58.5% satisfaction rate as compared to 24% of dissatisfaction rate expressed by the participants in terms of convenience. Although, the commuters are generally satisfied about the convenience aspect, the percentage of unsatisfied commuters is likely to affect the overall perception of satisfaction by the commuters. The mean value from the statistical test performed on this area of service quality scores at 42.5 given variance of 34.5% between satisfied and unsatisfied commuters. 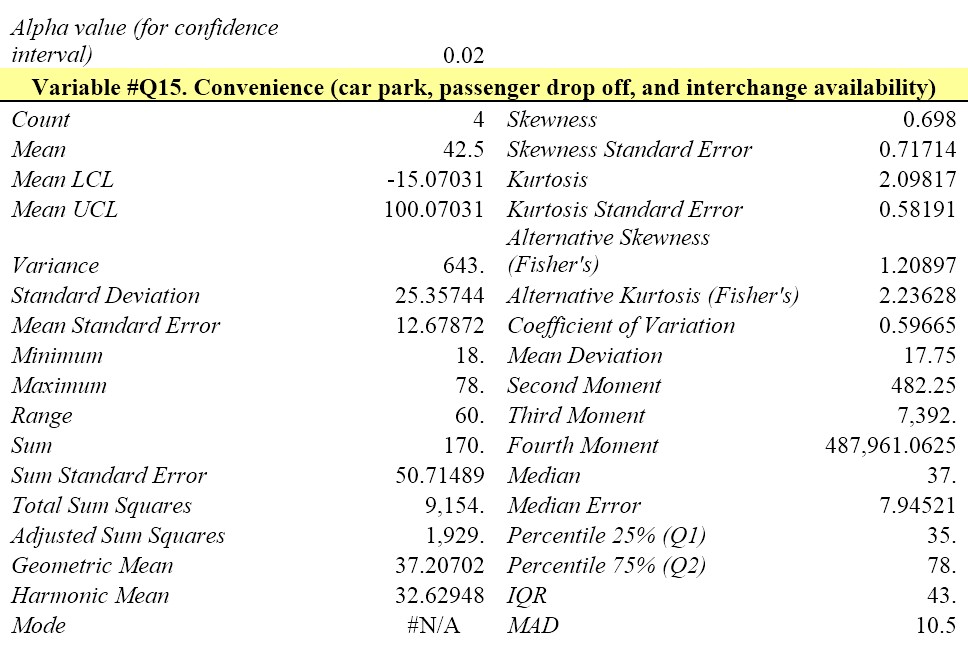 Overall KTM showed a satisfactory rate of 53.90% given all the five areas of service quality. Although, the commuters appears to be satisfied about the quality of service they are getting KTM when commuting, it is still not impressive enough on the grounds that there is a 46.10% of commuters are still dissatisfaction about the service. The gap between satisfied and dissatisfied commuters is very marginal at only 7.8%. There is still a huge probability that the gap can be overcome by the percentage of customer dissatisfaction provided that KTM did not address the weak areas of its service quality.

Having troubles writing your application essay to enter the college? Get an awesome college essay help online from Pro-Papers and be sure that our team will take care of your paper in the best possible way. 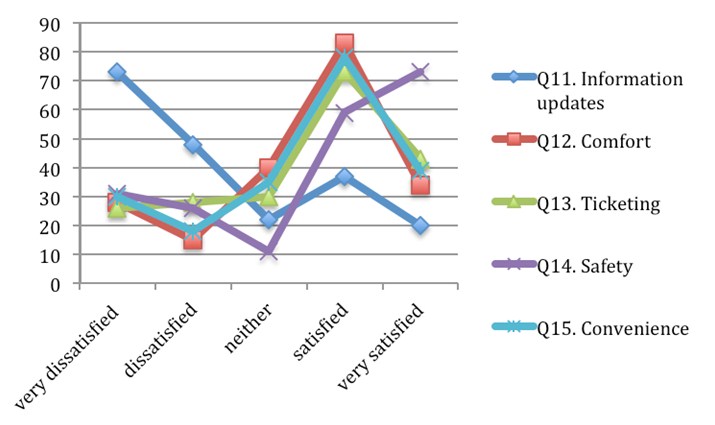