According to the Annual Report 2012 - 2013 (2014) Emirates Airline, the business of in-flight catering is attaining excessive range of profit margins. The reports states that the organisation has actually attained 11.4% increase for the costs of in-flight catering and the reason is quality oriented food and beverages that is increasing numbers of passenger’ and their loyalty in general. Revenue collected from the business of in-flight catering has attained a growth of substantial count of 15.8% towards a range of AED 1,407 million, as against AED 1,215 million of 2011-2012. This shows the majority growth from operations led by in-flight catering, especially to Australia and acquisition over the En Route International Ltd. The operations under catering in some other nations, such as Jordan, Singapore and UAE are further attaining positive amount of growth. As a result the number of meals has been uplifted to an unprecedented 28.6 million that is against 26.7 million in 2011-2012. This is thus 7% higher than what has been estimated in the former year. To sum up, the in-flight catering business is gaining excessive growth in earning revenues and the same is higher against the growth of volume that is considered primarily from high-yield forms of long haul flights. The declared revenue collection has been noted as - 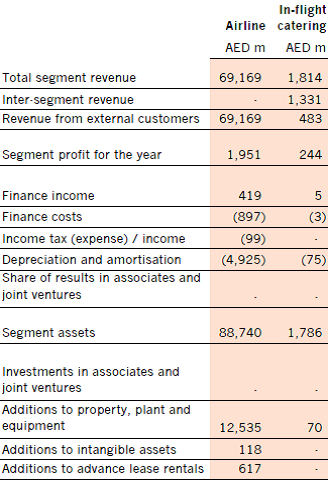 If you have decided to start writing on your own, that is your choice. Otherwise, we have college term papers for sale to offer. Our custom term paper writing services are available 24/7, and Pro-Papers Support Team is ready to assist you anytime.

As per the report led by Canadean (2014) Emirates Flight Catering has established itself in the field of in-flight catering service company. Since its inception in the year 2003 as Emirates Abela Catering Company, the currently popular Emirates Catering laid emphasis on offering quality-oriented food and beverages its clients. It services in the in-flight catering are much supportive to Emirates Airlines, and similarly ranked airline services. It is famous for offering more than 110 airline clients that are operating at Dubai International Airport. Moreover, it also own 90%  of the Emirates airline and rest 10% share are y Dubai Civil Aviation. The operational system of Emirates Flight Catering remains under serious surveillance and supervision of these airline services for quality check.

According to the declarations made by EKFC Company Information Page (2014), Emirates Flight Catering is a Dubai-based in-flight catering service that has been highly customised in accordance to the maintenance of quality food for the passengers for respective airlines connected to it. It has employment strength of more than 8,000 staff that are professionally trained as per the norms and the demands of international passengers and the regulations. This organisation prefers to have airport-based flight kitchens due to the attainment of appropriately managed cost-effectiveness in terms of space and labour. Though this is a difficult task to manage, yet the same is followed for the maintenance of quality oriented delivery of food items to the respective flights.

From the interview declarations, it can be noted that Emirates Flight Catering is actually offering world-class quality oriented ancillary services to all its airlines. As per its official declarations in its EKFC Company Information Page (2014), it was by 2012, that the company offered 47.5 million meals, on track generating 53.0 million meals for the year 2013. The market of airline catering, especially in terms of in-flight domain it is seriously under the severe pressure of maintaining quality. In this pursuit, the participation of Emirates Flight Catering is more about creating higher levels of competitive edge for the competitors. Its role as a third-party caterer is though not of much concern, yet its quality generated food is something that is holding its position well firmly in the market. In the recent times, calculated daily average of the catering business has attained an uplift of 145,000 meals served to 360 flights. This is possible as the EKFC follows absolute professionalism in its services and the same satisfies the customers to the maximum level. Contributions of the award-winning chefs, offering healthy meals and customised culturally influenced food; helped the company to attain newer heights and creating a novel level of competitiveness for the catering business at large (CANADEAN, 2014). The taste buds of the passengers are well known to them ad every food is prepared with the maintenance of its original flavours added by essential vitamins. In this process the company is very particular in avoiding additional saturated as well as trans fats, added sugars and salts to the food. All the dishes are prepared with specialised cooking techniques, and are added by traditional styles in association with the note of healthy eating, by stewing, poaching, grilling, baking, boiling and unique sous vide that is ‘under vacuum’ for the maintenance of integrity of all the fresh food ingredients through heating.

The maintenance of quality must get well supported by the type of food that is supplied by the in-flight catering company. In reference to the Emirates Flight Catering, the food is much inspired by internal ranged cuisines. In accordance to the respective route of the airline and the class of travel, Emirates Flight Catering is efficient in offering food items from traditionally inspired and culturally accepted range of food. All its meals are comprised of multiple courses. The presentations are much accompanied by tablecloth, assisted by metal cutlery and exclusive glassware, especially for the first class and business class travellers. The courses of meat as offered by Emirates Flight Catering are inclusive of chicken or beef. A denial to pork is maintained for the Muslim dominated passengers’ lobby. However, extensive selection from the fish dishes, various salads, or otherwise vegetables, breads, rolls, and desert are all part of its catering service. Provisions for alternative meals for the passengers who are following restrictive diets are a general practice of Emirates Flight Catering. With an advanced order placed during the ticket booking, to the company; the passengers can avail customised meals in-flight.

Major specifications for the distribution of diets can be noted in terms of Cultural diets, especially the Italian, French, Japanese, Chinese or Indian cuisines. Food for the infants and babies get highly customised. Preferences for baked beans, hot dogs and mini-hamburgers, stand common to this category.

Emirates Flight Catering further serves, religiously followed diets, that comprises of halal, kosher and Hindu, Jain and Buddhist vegetarian and even specified as Asian vegetarian)meals to the passengers. Provisions for vegetarian as well as vegan meals have been much acclaimed by passengers in general.

In respect to meet the terms of various Islamic airlines, like Emirates, Gulf Air, Etihad Airways, ets. Emirates Flight Catering is the popular brand for its food cooked under strict Islamic customs. All such meals are served in-flight are with Halal certification that is without alcohol or pork, though high class wines are still offered to the non-Muslim passengers as per their preferences.

However, there are still some issues that must be taken care of well, when it comes to religious of cultural concern. To exemplify one such instance, a declaration from an interviewee can be quoted here,

People have requirement of vegetarian and non-vegetarian, and you even have the requirement of halal food. For example, Malaysian airlines are so particular about halal. They might even cancel your contract if you are non-halal. The detailing which goes is that when your equipment is washed, you might be getting one flight from New York with pork products (non-halal products) and there is for example a Malaysian airline. Now when equipment is washed, we need to be cautious about not washing them together. From a religion point of view, its mixing halal and non-halal together. So now what do u do? You can’t have a dishwasher for Malaysian Airlines separately. So we go about it by emptying the washing tanks and adding fresh water to it. So the first dishes that are washed are from Malaysian Airlines. After that is complete, then any other airline’s dishes can be washed since they are not so particular. We need to constantly think, innovate as to how to fulfill the requirements.

These are the services that add the essence of reliability to the passengers and add the extra edge of satisfaction to the passengers in general, creating excessive range of loyalty to the respective airlines wherever Emirates Flight Catering is serving..

The role of Emirates Flight Catering is very particular in managing the business of in-flight catering. The quality oriented aspects are strictly followed and the regulations related to health, religion and culture concerns are handled with utmost efficiency. However, there is still enough to cover and maintain to have a well-recognised position in the market of in-flight catering. The chief goal of this is to maintain the quality-oriented food and services. Sustainability will get easier if the company is well versed with its approaches and remain crystal clear to the respective food, storage, presentation related concerns.