All types of Essays

Cause and Effect essay

All types of College Essays

All types of Research Papers

All types of Dissertations

All types of Theses

All types of Reports

All types of Review Papers

All types of Cover letters

All types of CV

All types of Resumes

About 1,253 tornadoes sweep the USA each year (ncdc.noaa.gov, 2016) causing devastation, destruction, chaos, damage and even death. According to the figures of the period from 1991 to 2010 of NOAA’s National Climate Data Center, tornado or even tornadoes hit every single state of America. This phenomenon made many meteorologists, storm chasers, and hazard researchers investigate it to understand tornadoes from the inside, evaluate produced impact and predict their appearance to save lives. Wind is the main driving force of any tornado, and it is a dangerous enemy, as a person is unable actually to detect a potential tornado until the wind forms a funnel of water drops and/or debris (nssl.noaa.gov, 2016). There are several widely used scales to measure tornadoes and hurricanes intensity and wind power, such as Fujita Scale, later on, improved and titled as Enhanced Fujita Scale and Saffir-Simpson Hurricane Scale. However, these scales focus mainly on physical properties and parameters of dangerous and aggressive weather events and not on damage they produce.

Stimers and Paul (2016) in the current article made a substantial research to develop, determine, and calculate category values (TC) of TICV (Tornado Impact-Community Vulnerability Index), as well as the TICV itself, the research will focus not only on physical parameters of tornadoes, but will also include such variables as a number of deaths (if any) caused by the disaster, social vulnerability, and monetary damage of a stricken community. The article is divided into several paragraphs, such as Introduction, Hazard Vulnerability and Indices, Research Methods, Results, Comparing and Contrasting the TICV across Four Tornado Events, Limitations, Potential Practical Applications, Future Research, and Summary and Conclusion. The article's division into paragraphs and subparagraphs makes it easier for readers to concentrate on a particular section of information, and authors provided all the details in their study, from presupposition to research and data extraction to research findings and results discussion.

This paper aims at enlarging knowledge of potential readers toward this burning problem and introducing a brand-new index for measuring extreme weather conditions' impact and their after-effects on a particular community. This new development will certainly come in handy for emergency workers and community officials who look for more advanced and enhanced methods of evaluating possible social and economic damage from tornadoes or hurricanes. The TICV may also use previous data and information to calculate scenarios of potential damage in future (Stimers and Paul, 2016).

It is absolutely evident that every community, whether it is a small city or a large town, is vulnerable to a tornado or hurricane to a certain extent. The EF-Scale, as well as F-Scale and Saffir-Simpson Hurricane Scale, tends to focus on such physical parameters as wind speed, reasonability, magnitude, atmospheric pressure, size and impact, energy released (Stimers and Paul, 2016), but not on the effect that such extreme events cause on a certain community. Given all the information mentioned above, Stimers and Paul (2016) add that many researchers believe that an impact of a particular disaster is a result of a number of place-bound social factor, such as social, political and demographic standing of a community, i.e. damage of the disasters depends on the society they strike. Therefore, a term “vulnerability” was used to describe a sensitivity of a community to a potential disaster, and its ability to restore after the event. The prime goal of the research conducted by Stimers and Paul (2016) is to fill the gap in this knowledge and develop a Tornado Impact-Community Vulnerability Index (TICV) to describe a level of impact on some communities stricken by a tornado, including information about financial damage incurred, persons killed and social vulnerability of such communities. To give a more specific representation of such impact, it was decided to include into this study only populated areas, known as placed areas, as the US Census Bureau defines them (Stimers and Paul, 2016). The developed index is based on tornadoes that swept the USA from 2000 to 2009.

Before proceeding to the Data Extraction Section, Stimers and Paul (2016) give a detailed insight of reasons why a certain household, community, or place may suffer more or less from a particular disaster. Namely, authors of the article suggest that place and community profile are to be considered to determine vulnerability, as racial and ethnic inequality, poverty, poor education, high density of built environment, socially dependent population, and income per capita factors influence and contribute to the potential vulnerability of communities. The Research Methods section is divided into two subsequent subsections Data Sources and Data Extraction and TICV Calculation Methods, in which Stimers and Paul (2016) describe how and what data was used to develop the TICV index. Data is based on place, tornado’s length, its physical interference with a local community, intersected area, fatalities, financial damage and other important information that was gathered from the Storm Prediction Center database (Stimers and Paul, 2016). To conduct their research, authors of the article used a base map from the National Atlas that contains about twenty-five thousand communities, three thousand counties and fifty states. This information was put into the Geographic Information System (GIS), and those fitting the data collected from the US Census Bureau were chosen from the large quantity of the states and communities, which made up an initial score of 12,657 tornado events. Later on, this figure was replaced by a new one of 1,885 of community-intersecting tracks. Through eliminating of unpopulated, barely populated areas or those that aren’t defined as “placed” by the US Census Bureau, the final figure of 981 tornado events was generated for this study (Stimers and Paul, 2016). Figures 1, 2 and 3 below illustrate this process of elimination. 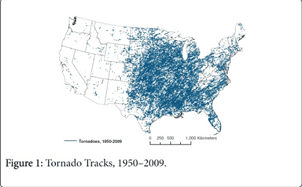 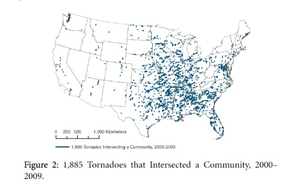 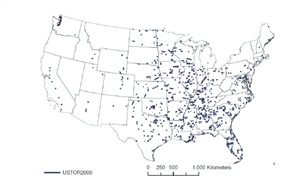 (Images retrieved from Stimers, M. J., and Paul, B.K. (2016), Toward Development of the Tornado Impact-Community Vulnerability Index, Journal of Geography and Natural Disasters, 6 (1))

Such states as West Virgina, Nevada, Montana, Rhode Island, Delaware, Vermont, and Oregon were not considered in the study because tornadoes in these areas had no effect on communities. This information is essential for understanding a calculation process.

It is necessary to add that all census data was taken from the 2000 U.S. Census Download Center (Census 2010), and as a result, authors downloaded seventeen tables for the summary file. Subsequently, upon examination of these tables, 375 variables were ready and put into the correlation matrix. Finally, the authors of the article chose 19 variables to represent a vulnerability of a specific community. These variables represent a percent of total housing, Hispanic population, African-American population, mobile homes units, people with moderate income who live in their own hourses, females and female householders, single females and families without children, children under the age of 5 and people older than 65, young people of the age 16 and above, people over age 25 without secondary education, people of median age, people with the extremely low rate of income defined as poor, average number of people who reside in a particular house, renter-occupied houses, unemployed people, a number of people working in the sphere of service, families with the income of seventy-five thousand US dollars per year and more, income per capita, and income of people living in median houses. (Stimers and Paul, 2016).

The TICV Calculation Methods section describes in details a process of calculation of the TICV index and TC categories, but because of the complexity of this process, it was decided to give a general overview of the calculation in the current paper.

A complete TICV calculation process is given in the Figure 5 below. 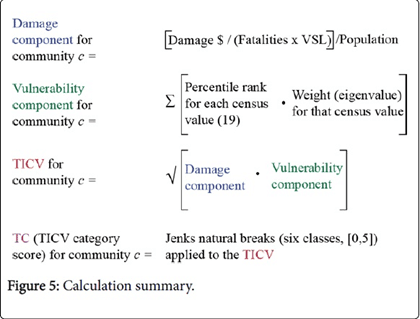 The image retrieved from Stimers, M.J., and Paul, B.K. (2016), Toward Development of the Tornado Impact-Community Vulnerability Index, Journal of Geography and Natural Disasters, 6 (1).

Therefore, from the calculation results, Stimers and Paul (2016) state that fatalities, which occur during such disasters influence vulnerability scores more than actual financial damage despite the fact that such damage is harder to reduce and restore from it. Further findings showed that East Texas, as well as states situated in the south of America, including South Carolina, Arkansas, Alabama, Louisiana, Mississippi, and Georgia are highly vulnerable to tornadoes. It can be added that there are some vulnerability indicators such as education, race, social class, and political views (Stimers and Paul, 2016).

Subsequent compare and contrast analysis of the TICV index across the four tornado events written in the corresponding part of the reviewed article reveals that each tornado event effects each community differently. Namely, four communities, where a particular tornado event took place, were examined. They are Greensburg (Kansas), Enterprise (Alabama), Ladysmith (Wisconsin), and Manhattan (Kansas). According to the information obtained from closer examination of the tornado events happened there, it is evident that Greensburg suffered a devastating tornado with the total monetary damage amounting to $327 million and the city almost immediately started to rebuild itself, while Ladysmith that suffered from the tornado rated F3 at its highest point showed no evident signs of restoration by January 2012; Enterprise and Manhattan events, despite the fact that they were rated EF-4, they had very different after-effects. For instance, Enterprise suffered a major damage estimated in about $250 million, the tornado destroyed 239 homes, nine residents were killed in this disaster, and eight of these people were children (Stimers and Paul, 2016).

Authors of the article also mention limitations of the TICV index. Namely, calculation and implementation of this index may be difficult in large cities due to the small variability of the scale. Stimers and Paul (2016) also speak about the need for inclusion in future studies a "time-of-the-day" variable, as it also affects vulnerability of a certain community, as tornadoes that happen at night increase overall risk of deaths and traumatic events. Future studies and research may cover such topics as the improvement of already developed scales to evaluate vulnerability and damage, and relating already developed scores to the recovery time.

The study described in the reviewed article is essential for all the communities that suffer from annual tornado events of diverse magnitude. Stimers and Paul (2016) proved in their study hat Fujita Scale and Saffir-Simpson Hurricane Scale rates cannot give an actual impact that this or that tornado or hurricane may have on a particular community. As it was proved by the compare and contrast analysis of four tornado events, tornadoes of similar magnitude have a strikingly different impact on different communities. To devastate a city, it is not necessary for a tornado to be physically strong or ferocious.

The overall impact on a particular community may be determined when taking into consideration all the possible factors, such as physical strength of a tornado, reasonability, social standing, education, location, as well as monetary and social vulnerability. Results and findings of the current study may and should be used by local emergency groups and officials to generate potential tornadoes scenarios, their diverse impact and monetary damage on the taken community. This scale should be generally introduced and taken into account on equal terms with Fujita Scale and Saffir-Simpson Hurricane Scale.

It seems that every single person on the planet watched at least one Disney cartoon once in his or her life, and it is completely understandable… .

Alternative medicine, known to some as fringe medicine, refers to medical practices that are often unproven or show great difficulty in proving and… .

Payers are essential for any healthcare system since they are not only the main consumers but also the facilitators of the health activities (Ravi et… .

SPIN THE WHEEL TO GET A SPECIAL BONUS!
Try your luck and win your first order discount.