Barriers to Implementation of Auditing in an organization: Case study of Kuwait State Audit Bureau - Part 4

Chapter three will provide information relevant to the study and this greatly entails depicting information relevant to the applied instruments including assumptions and the structural development of the methods. In particular, the analysis of the study conceptual framework would be defined and its focus on measuring qualitatively the barriers of implementing auditing and the subject matter as well as the impact of these barriers on the overall performance of Kuwait State Audit Bureau. The corresponding studies of this work would also provide proportional study option with the execution of the study platform in two major study parts.  The study is hence proportionally illustrated by identifying the relative contexts required to achieve the study results.

Auditing is cognitively defined by both internal and external procedures, invoked by better resource handling techniques. The Audit maturity model explores the greater aspect of its authenticity while equally reflecting continuous level of professionalism in auditing mechanisms (Arnold and Sutton, 1998). Proper organizational auditing is a critical process that is challengingly crippled by the organizational policy developments as well as reduced expansion in reflected auditing evaluation models. The consistencies in effective considerations are knowledgeably illustrated by applicable auditing components, defined by Bagozzi, (2007) as a process for adaptations in financial growth and increase in the overall accountability in Kuwait State Audit Bureau. Behn et al, (2006) whose procedural analysis expresses the content factor necessary to add value and full the required potentials within a company auditing setting, illustrate the effective driving force in this. The quality auditing on both the organizational managerial level and on the concurrent industrial potentials explain that about 23% of auditing budget defined by Kuwait State Audit is ploughed back into the extremes of business performances.  Illustrated as the core component of a well-established auditing, gainful application of knowledge in a wider spectrum would be positively fulfilled by skill development of the concepts of auditing and enacted techniques guided by given policy statements (Chuttur, 2009).

The problem depicted in aided effective auditing within the Kuwait State Audit Bureau is structurally determined by the overall output achieved after auditing (Chuttur, 2009). This derivative explains that despite the fact that a significant amount of input is put into consideration, the resultant level of statistically viable results appear to be negligibly influential. According to Davis, (1985) companies would sluggishly be derailed by resource usage in which the statistical application demonstrate as the hallmark to an effective quantification of auditing efforts. The establishment hence projects the overall trend in measuring auditing opportunities, critically exploring the intensiveness of the Audit maturity model at a disapproved level within which resources are thought to be ineffectively used. Although the absolute measurement of auditing through qualitative mechanisms appears to be laying the foundation for the specific objectivities in organizational operations, the disapproved acknowledgement in this concept explore what would be a deterrent factor, (Arnold and Sutton, 1998). The deliverables of specific skills determined through auditing are observably relevant in quantifying standards in auditing and essentially defining the goals to be achieved. Bagozzi, (2007) suggest that important variables necessary to define the implications of effective auditing are significant for the research. Behn et al, (2006) identify gaps that are concentrated on the effective measurement of auditing modules and within the relevancy; improvements in knowledge transfer could negatively be depicted from the organizational review process. Additionally, Chuttur, (2009) believe that the nature of auditing entities, the auditing function characteristics reduced significantly in Kuwait State Audit Bureau and collectively impart knowledge on auditing design procedure through well-defined working environments.

According to Davis, (1985) there is need to broadly identify the dynamics required for knowledge transfer, and most importantly looking at the classical concepts of better synthesis of information. The suggestion in Arnold and Sutton (1998) indicate that knowledge transfer in effective audit methods could be achieved innovatively through aided procedures, including achieving the specific induction correlations at the level of organizational metrics.

The primary aims of defining proper implementation of the audit process are defined by the following objectives:

The analytical framework in the following figure would provide the measurement portal for effective financial controls and its uniqueness would be established basing on the rationale involved. Further, the model explains the relevance of the research and how it would be positively listed in the study. 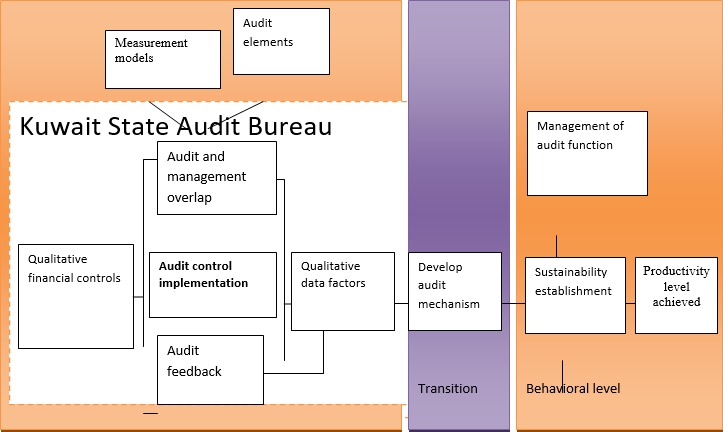 The figure above provides a model for Measuring Qualitatively the effectiveness of the audit maturity model.

This is study is not only aimed at examining the barriers faced by an auditing organization in Kuwait but is also examines the degree of the audit challenges and whether given metrics can be utilized in enhancing the delivery of audit processes. The methodology adopted in this research is based on the audit maturity model and it signifies the generic findings relevant to adoption of the distinct empirical classification of built-in application techniques.  The study goes beyond the derivative of the auditing magnitude in the case study established but the comparative focus of the implementation process is encapsulated as a product of the overall study concept. By measure of extension, the innovativeness of the given specification would be achieved if relevant auditing standards and contextual factors (government regulations and appropriate governance) were fully attained.

The study guidelines are based on the analytical framework for the auditing barriers in the Kuwait State Audit Bureau, with the following classified research questions aimed at enhancing the delivery of audit control mechanism.

This research is accomplished through the ultimate definition of the combined propositions and research questions. The study is proportionally recreated through the hallmark of linked concepts. In particular, the appropriateness of these questions is qualitatively derived. The first research question was based on qualitative investigation on the audit controls and the effectiveness of its application in Kuwait State Audit Bureau. On one part, the three remaining questions are empirically tested with the hypotheses. This particularly ensures that the data achieved is composed of well-balanced test items.  The hypotheses illustrated hence (H1 and H2) are based on hierarchical classification and this implies that practical quantification of effectiveness of the audit process and control is factually determined.

Research Question 1: How relevant are the barriers in the information gathering and audit control and reporting in Kuwait State Audit Bureau?

Proposition 1: The conceptual factors that are established qualitatively to measure the perceived audit control mechanism are similar to the sustainability elements (Competence, effectiveness, flexibility, risk assessment considerations) that have been found to comprise constructs of audit controls.

Research Question 3: Is there any relationship between poor monitoring of audit controls and service delivery in the functionality of Kuwait State Audit Bureau?

Proposition 3: The greater the quality of monitoring conducted, the greater the effectiveness of service delivery hence organizational performance.

3.3.4 Target Population and Sampling Methods (Justification should be detailed)

The area of study covered major financial streams in Kuwait including key financial institutions as well as major markets that have relevant relationship with the major auditing institutions in Kuwait.  The research area comprised of several analytical considerations in examined barriers where a systematic analysis on relative hindrances to proper functioning of Kuwait State Audit Bureau. Basing on the examined classification relative to the focus of the audit levels and in view of the extent of the use of the Audit Maturity model, the performance index of the relative process include the audit approach, the emerging audit consideration and the continuous audit monitoring levels. In the study, the population levels considered is based on the target specification (including the Kuwait State Audit Bureau shared system and resource usage departments) and the extensive levels of staff participation.

The stage level for audit management is classified according to the nature of expertise as well as the actual utilization of resources envisioned in the study capacity levels. To effectively attain the population capacity is 120 classified audit controllers and managers from 4 locations and the average classification ratio of 4:1 (factored alongside the major mathematical interpretations. The participants were specialists in audit controls, management and implementation from audit institutions and upcoming enterprises whose input in the growing trend established was seen to be extensive as with regard to distinct monitoring and evaluation of these outgrowths. The population further involved government audit regulators who were seen to be playing a major role in ensuring that the Kuwait State Audit Bureau was given the identity in order to enable it to move forward towards implementing the audit control mechanisms. The researcher further established that the expected variables in the research population also included key contributions and attributes achieved through a standard technique of measurement that project conditions for the research. Hence, this involved the acquisition of information through the use of questionnaires. Additionally, financial experts as well as the state bureau audit administrators played a major role in ensuring that relevant data was obtained as per given metrics of the research.

From this study, the entire process of sampling data required proper analysis of information. In view of the complex nature of the research, the work evidenced samples of data relevant to the research. The sample consisted of 70 respondents, 35 audit specialists from different institutions, 23 audit administrators from the Kuwait State Audit Bureaus, 6 government regulators also from different government institutions, 6 financial experts from different financial institutions within the area of the study. Simple random sampling was used to select respondents to avoid biased information.

Do you often have no time for writing tons of papers assigned by the teachers? Perhaps, the time has come to address to the Pro-Papers writing service and buy argumentative essay?

In this research, the study was carried out purposively to examine the barriers that Kuwait State Audit Bureau face in its implementation of audit control mechanisms with universal comparison, which would clearly bring about the role of auditing in Kuwait. Hence, the ideal sampling process was relevantly very important. The sampling procedure used was purposive sampling to obtain the sampled institutions where auditors played major roles. Simple random sampling was used to select respondents from those institutions to avoid biased information. This ensured that all audit controllers as well as other respondents in the relevant institutions were equitably represented.

Observation: In this study, the researcher also used observation schedules in order to obtain the data necessary to answer the research questions in order to achieve the objectives of the study. The financial experts who were chosen for this were seasoned experts with robust knowledge in audit controls and their influence on additional Kuwait investment scenarios and relevant classification of the research explained clearly, why they were vital. Data acquisition through observation, relevant information regarding performances of the businesses at various financial times were clearly demarcated and illustrated