One hundred online questionnaires were sent to a select group of employees who were self-identified as in managerial positions in the pharmaceutical of Greece. The contacts were a special group who I had made contact with earlier through the social media LinkedIn. Twenty seven of these 100 contacts responded to the questionnaire. The response of about 30 percent from a small group of online contacts has been accepted as a realistic response rate. (Bennekom, 2005; IRA, 2011) Twenty seven respondents out of 100 contacts showed a deviation from the expected 30 percent of only 3 percent. 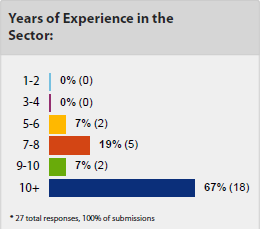 Figure 4-5 Eighteen respondents (67%) were in senior management and nine (33%) respondents were in middle management. That corresponded to the total 27 respondents. (See fig.4-5) 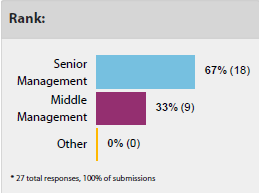 Figure 4-6 The company ownership was split between 70% were foreign (multi-national-international) and 30% were Greek. (See fig. 4-6) 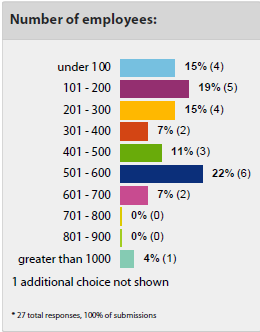 4.2.1 Summary of the Demographics and Organization Descriptions

The demographic information reflects the findings of the pharmaceutical sector survey carried out in 2008 by C.-V. Priporas in the Department of Marketing and Operations Management at University of Macedonia and his co-researcher, G. Vangelinos from Genesis Pharma both institutions are located in Thessaloniki, Greece. For example, the pharmaceutical sector managers are well-educated. All of the respondents (16 respondents, one manager per company) to the Priporas-Vangelinos (2008, p. 92) survey had at least a Bachelor’s degree, 37 percent had Master’s degrees and 37.5 percent held PhD diplomas. The research showed 48 percent with Master’s degree and 25 percent with PhDs.

Generally, more men than women responded to both surveys. The research showed that the respondents from the Linked-In connections were divided between foreign ownership, 70 percent and 30 percent were Greek-owned. In comparison the interviewees in the Priporas and Vangelinos (2008, p. 92) showed 5 out of the 16 pharmaceutical companies were Greek-owned, and the rest were foreign owned. The breakdown of the foreign ownership was four – U.S.A., two-Germany, two-Denmark, one-Australia, one-Swiss, and one was a British-Swedish firm (Priporas & Vangelinos, 2008, p. 92).

Middle managers and senior managers were represented with about twice as many respondents in senior management, 67 percent (frequency 18) than in middle management 33 percent (frequency 9). The mean average for years of experience in the pharmaceutical sector equals 6 ¾ years and the median average equals 3 ½ years but these numbers are misleading in this case. Most of the respondents, 67 percent (18), had over ten years of experience in the pharmaceutical sector. The rest indicated they had experience in the sector from five to ten years. The respondents from LinkedIn represent a range of company sizes from under 1000 to 700 with the exception of the one very large company (greater than 1000 employees).

The demographic information from the participants showed a satisfactory mix of well-educated, experienced middle aged middle- and senior-managers. The comparison of the demographics from the survey to published research, also based on a purposive sampling survey indicated the participants reflected a representative group of managers who could add to the knowledge base.

Figure 4-8 (Survey Question 1) A total of 74% (frequency 20) reported that they do not have KAM managers who do not have field team management responsibilities. Twenty six percent (frequency 7) reported key account managers dedicated to the key accounts. (See fig. 4-8) 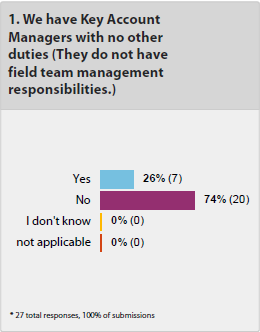 Analysis 4-8, 4-9 and 4-9a All the respondents were sure whether or not the company they worked for had Key Account Managers who focused only on key accounts with no other duties. Bhatt (et al., 2007, p. 6) pointed out that a key account manager needs to be able to “align the cross-functional team on (a) key customer needs, (b) account objectives, and (c) the resulting interaction plan.” When the key account management focuses on these three activities the positive impact of increased company performance is enhanced. 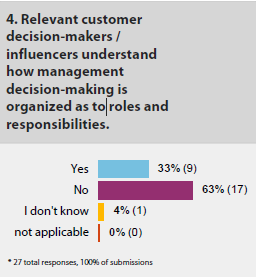 Figure 4-10 Analysis Figure 4-10 addressed a critical feature of KAM success; transparency about how decisions are made is necessary for the success. Transparency requires that roles and responsibilities in the KAM are clearly delineated

The process of writing research papers on culture can take a lot of time. So if there is a lack of time, but you want to get a good mark for your paper, buy it at Pro-Papers at an affordable price.

Figure 4-11 Thirty seven percent (ten respondents) noted that a formal process exists for researching customer’s business needs. Whereas, 56% (15 respondents) reported that their company has no formal process for learning what the customers needed. (See 4-11) 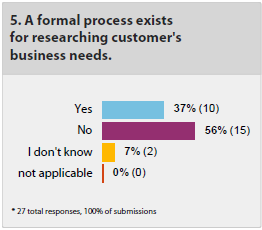 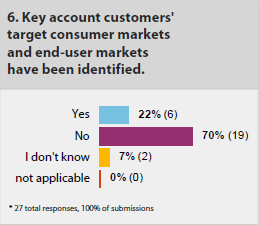 Figure 4-13 The necessary amount of supplier involvement for customers to reduce their costs or improve productivity was reported by 36% (9 respondents) compared to 56% (14 respondents) who answered ‘no.’ (See fig. 4-13) Twenty five of the total 27 submissions responded to this question. 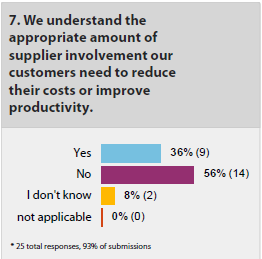 Figure 4-14 Customer solutions about the necessary amount of supplier involvement for customers to reduce their costs or improve productivity are not shared in dollar amounts for 59% (16 respondent) and 30% (8) responded ‘yes.’ (See fig. 4-14) 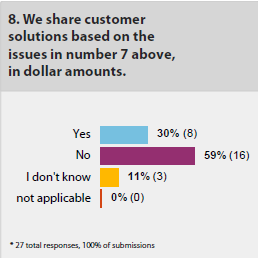 Analysis 4-14 This question was asked because it addresses the need to organize the complexities of key accounts into sub-parts for easier management. The pricing tools were chosen that were familiar and showed an understanding of external economics locally and globally (Bhatt et al., 2011). The dollar was the value suggested because large pharmaceutical companies are partnerships with U.S. and European companies and because the United States Dollar (USD) had a profound impact on the Greek economy. Since over two thirds of the respondents answered “No” the Euro could be the main currency prices, production costs and labour costs were compared within the Greek pharmaceutical companies. Further research is needed to learn the answer. 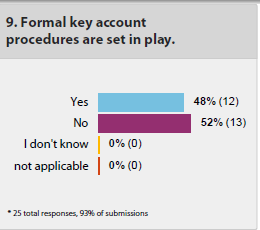 Figure 4-16 The formal key account procedures that were in place included both strategic and tactical methods for 44% (11 respondents) but not for 40% (10 respondents) of the companies. (See fig. 4-16) Four respondents (16%) responded “I don’t know.” Twenty five out of the total 27 submissions responded to this question. 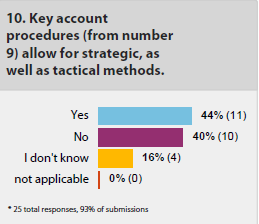 Figure 4-17 KAM was reported not to be in alignment with local and national regional planning by 78% (21 respondents) of the managers as opposed to 22% (6 respondents) who answered there was alignment. (See fig. 4-17) 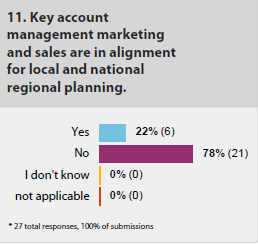 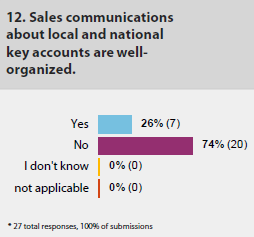 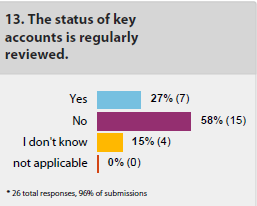 Figure 4-20 The outsourcing of KAM was found to be done in eight percent (two respondents) of the respondents’ companies, but not outsourced in 88% (23 respondents). One respondent (four percent) reported “I don’t know.” (See fig. 4-20) The total number of respondents for this question was 26 out of the 27 total submissions. 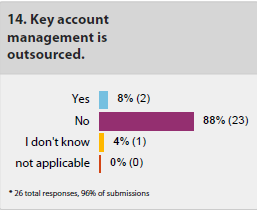 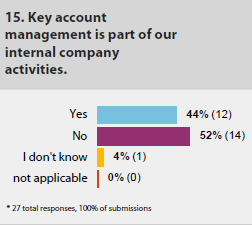 Analysis 4-15 to 4-21 Question 9 on the survey (see fig. 4-15) asked if formal key account procedures were in play at the respondents business. Forty-eight percent (12 respondents) answered “Yes” whereas 52 percent (14 respondents) answered “No.” Question 15 asked a question that dependent on whether or not the company uses KAM “KAM is part of our internal activities.” Fifty two percent answered “No” to this question, too. Therefore, the researcher assumed that questions 10 through 14 were answered by the participants who had KAM at their place of employment. On both question 10 and 13 four participants did not know if their company used KAM for strategic and tactical methods or if regular reviews are held about key accounts. Otherwise, the answer for question 10 was divided close to 50/50. Eleven respondents replied that KAM did allow for strategic and tactical method, but ten replied “No.” Question eleven showed that the majority companies did not align their KAM with local and national regional planning (21 out of the 27 responses).

The high percentage of negative answers to the questions from 11 to 14 showed that Greek pharmaceutical companies need to change; adjustments needed to be made in the company for the best possible use of KAM. As discussed above, 78 percent did not align KAM with external factors; question 12 showed that 74 percent do not engage in organized sales communications about local and national key accounts. Question 13 showed the majority of the respondents answered “No,” meaning that key accounts were not regularly reviewed. Outsourcing of key accounts to consultants was indicated by 88 percent from 26 responses. The high degree of negative responses to how KAM was carried out indicated that outsourcing of KAM was not giving the companies the desired results.

Figure 4-22 shows the answers colour-coded depending on the answer on the Likert Scale. The colours make comparison of the companies for customer account management. For example, A) asked if the customers’ contact data has been gathered, organized and maintained and the results was a large green rectangle noting that 81 percent had indicated “always.” The light blue coloured sections along the left side of the graph range from 19% to 33% and are linked to the answer “Never/Not at all.” 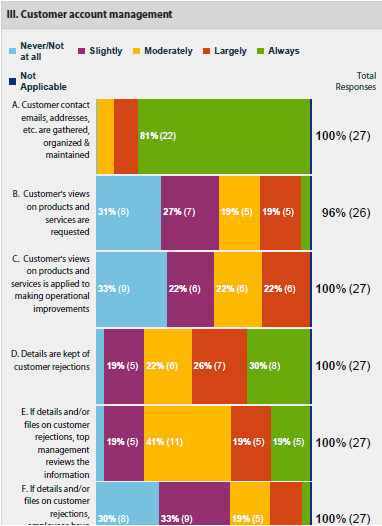 Bhatt (et al., 2007) explained that a range of customers were targeted by pharmaceutical companies including pharmacies, doctors, hospitals, as well as non-traditional customers termed “payers.” Four general types of customers were referred to in the questions A to K. One type was physician networks which take on the decision-making from “individual prescribers” (Bhatt et al., 2007, p. 2). Secondly, hospitals were merging and formed hospital chains. Thirdly, use of the Internet changed the customer environment, because online pharmacies were gaining large amounts of market share (Bhatt et al., 2007). Fourthly, payers, like Germany and the U.K. were responsible for negotiating with the pharmaceutical industry (Bhatt et al., 2007).

The questions were designed to learn if customer accounts are kept as detailed records of the customers. Detailed records are important when the goal is establish because strong, long-term relationships with customers are a critical part of KAM. The administrative process of organizing and maintaining customer records like emails and other addresses is done in 100 percent of the companies (frequency 27 out of 27). On the other hand, the customers’ views on the products and services and their requests were not kept on record. None of the respondents reported the customers’ views were always requested. Only 38 percent (frequency 10 out of 26) of the respondents reported that business activity was “Moderately” or “Largely” done.

In fact, 31 percent (frequency eight out of 26) reported the customer’s opinions were never requested. Customers’ views on products and services were not prioritized for making changes in operations. The answers demonstrated that detailed notes on why customers rejected products was not a priority in all the companies.

A strong indication that that top management was not dedicated to KAM was seen in the answers for question E showing that even when details are kept on reasons for customers rejections, the top management does not regularly review the data. Seventy nine percent 21 out of 27 respondents reported that such a business activity happened never or not at all, and the statement was slightly or moderately true. Bhatt (et al. 2007, p. 6) learned from their research survey that lacking company reports had made access to resources difficult and put no pressure on other departments, like the marketing teams to become involved with KAM functions.

Is it too late to start writing a term paper, hence deadline is very close, and you don’t know what to do? Here’s a tip - ask for term paper writing help online at Pro-Papers and for a moderate price you'll receive it promptly.

The responses were not positive on the subject of employee transparency and access to customer data. In the companies where details and customer files were kept on the subject of customer rejection, 82 percent (frequency 22 out of 27) indicated that the statement (Question F) was true not at all in 30 percent of the cases, slightly in 33 percent of the cases, and moderately in 19 percent of the cases. Customers needed to have their specific, unique needs met, but the support necessary from the leadership in the pharmaceutical companies as well as attention to detail was not available. The attention to detail was better for cost breakdowns on each product. Insight to customer rejections due to product prices was identified in the cost breakdowns. Possibilities for potential process stages to reduce prices were identified such as materials, labour, generics and other steps.