The first and the foremost impact of strengthening the regulation on banks would transform the way the banks operate. In their study of 713 banks in the OECD countries between the years 1993 and 2007, Barrel et al. demonstrated that when there is an upward adjustment in the equity capital ratio, there is not only a change in the risk aversion tendency of banks just prior to the change but also after the change really takes place. Similarly, the study of100 different large global banks that were conducted by Cosimano and Dalia in the year 2011 revealed that the impact of stringent capital regulation is different in different nations and this variation chiefly depends upon the increase in the cost of capital and the flexibility of credit demand seeking change in the rate of interests.

Would you like to write an A+ essay about racism in America? If you don’t know how to handle it on your own, Pro-Papers is always here to prop you up with your work!

The relative impact of the capital regulations on banks and shadow banks is graphically represented below. 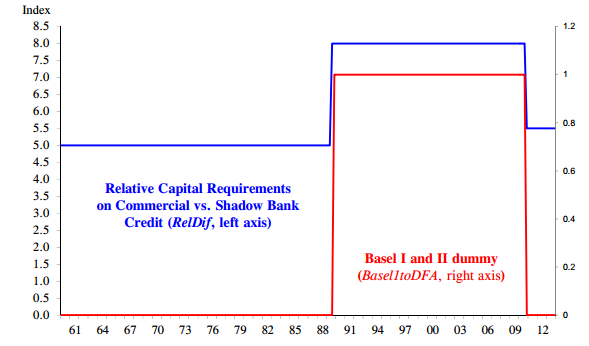 In the recent past, three different studies have examined the implications that loan pricing of the proposed high requirements of capital under the Basel III regulatory framework. Elliott offers an accounting-based analysis in the form of specific amount of increase in interest rate on loans if in case the banks in the U.S. need to hold more equity. The ratios calculated by Elliott in his study indicate “that if the ratio of common equity required for a given loan is raised by 2% and no other adjustments are made, banks would need to raise lending spreads by 39 basis point to maintain a target ROE of 15%.” The assertions made by are Elliott that the impact of the strengthened regulation varies based on the asset size, province and the business models of the respective banks; however the impacts in terms of the escalation of the lending rate and reduced capacity of the credit supply are not very attractive because the banks gradually inflate their capital and internal funds in order to be able to meet the requirements.

Likewise, Kashyap et al. ponder upon the question with regard to the phasing-in of considerably intensified capital requirements. This study also gives prominence on the unintended outcomes in case the regulation is made applicable to just banks alone and not on the shadow-banking sector. According to their study, “assuming the cost of long-term debt is 7% and the corporate tax rate is 35%, their baseline estimate is that an increase in capital-to-total assets by 1pp would raise the weighted average cost of capital by 2.5bp (=75×35%)”.

Yet another recent study pertaining to the same topic was conducted by King calculates that the greater cost factor that is associated with a 1% point upsurge in the capital ratio can be regained by augmenting the lending spreads by 15bp for a representative bank. This design presumes the return on equity (ROE) and the debt cost to be unaffected, with no variation in other income sources and also no decrease in the operating expenses. In this study of King, the author also conducts standardization in order to determine that the bank would require boosting the lending spreads by 24bp for meeting the set target of the Net Stable Funding Ratio (NSFR).

Ultimately, from the various literatures that has been reviewed and presented in this paper, it is obvious that strengthened capital requirement might result in the reduction of the ROE of banks as the debt get substituted with equity that is more expensive. It is assumed by many studies that banks would increase the lending spreads among the measures that might be taken by them for preventing ROE from dropping. In order to evaluate the essential lending spreads when the capital regulation is stiffened, a few studies have employed the accounting relationship by making use of the balance sheet data and income statement of the banks following spirit of the studies conducted by King et. al, or Elliott. Due to the fact that the responses of the banks in raising the lending rates vary depending on the business models and the geographic presence of the banks, the analyses was conducted for various business models in different geographies.

A special report that was issued by Dun & Bradstreet, Inc. in October 2010, the Basel III regulatory framework on the banking sector is expected to improve the overall stability of the global financial market. Yet, a spin-off of the Basel III regulatory framework would be the implementation of constricted credit conditions for a few business activities. Banks will have to conform slowly with the fresh, sterner guidelines, as the complete implementation of Basel III is not expected to happen any time before 2019. This being so, it is very imminent that institutional borrowers be aware of the risks as well as the hidden opportunities that the new context encompasses in order for a more expensive terms of financing.

In this backdrop, the impact of Basel III on the global trade finance is apparent in three way specifically.

This being the scenario pertaining to the negative impact that Basel III has, banking groups and legislators are urging for changes to the proposals made in the Basel III thereby. It is pointed out that outsourcing by companies in the developed economies is a highly crucial source for employment and investment and trade finance plays a very key role in this entire process. Many pioneering bankers are of the strong feeling that the financial crisis was not a result of transaction banking and as such too much risk is unwelcome. Regardless of this, it is felt that regulations that go much beyond their endeavour to expel certain risks that arise of the load portfolios of banks are likely to hamper economic recovery.

The Basel Committee however is pretty cognizant of these criticisms and concerns. This cognizance is essentially a result of the extensive lobbying of the banking community at large. As a result of the extensive lobbying, the committee finally waived the one-year maturity period for letters of credit which have been already issued and confirmed. Global trade is too huge and highly significant for it to be impacted acutely by the Basel III regulatory framework. However, the new stipulations certainly are anticipated to boost the costs of any type of funding activity which is definitely has a positive outlook for growth. The article analyses the existing situation of the Euro Zone by highlighting on the European debt crisis, along with the methods that would help in solving the crisis. This article written by Jamal Ibrahim Haidar and is title "Sovereign Credit Risk in the Euro zone.” According to this article, the fact is that the probability of default on the sovereign debt augmented analogously along with a plethora of microeconomic misalignments in various parts of the Euro Zone and this trend started in the year 2007. A few examples of such misalignments that have occurred in the Euro Zone budget deficits which were essentially triggered due to recessions, strategies that were specific to the region among others. There were also massive political risks that were specific to geographies like Spain, Ireland, Portugal, and Greece etc.

Numerous measures can be taken to minimize the likelihood of sovereign default in the Euro zone. In case of Italy and Spain, for instance, better rating of the sovereign credit risk can be reinstated by increasing the tax rates or/and minimizing the government purchases. Greece can do a better job in order to inflate away the real cost of sovereign debt with higher degree of corporate activity, augmented economic growth, and/or a bailout. While the balance between the advantages and disadvantages of these strategic tools and choices differs across various nations and time zones and such trade-off valuation is not honest at all times.

We perfectly understand that the technical writing is hard, cause it’s usually a practical field. You always can count on help with your technical report outline, so don’t hesitate to contact Pro-Papers.

At this juncture, a question that might pop in everybody’s mind is if the Euro Zone really is different from other nations? When the developed economies are considered, the members of the Euro Zone do have issues with respect to the probability of sovereign debt default, economic development, and the credit risk. However, budget deficits are not particular to the Euro Zone alone. This is being said so because, higher budget deficits are present in even the developed nations like the United Kingdom, and the United States when compared to nations like Greece and Portugal etc. Furthermore, the ratio of sovereign debt-to-GDP is almost 90%, striking an adverse effect on the real GDP growth rate, according to the research conducted by Reinhart and Rogoff.

While in the case of emerging economies like China, many developed nations experienced deteriorating budget deficits when compared to the emerging nations during 2007 and 2011.