2.2: Analysis of causes of Gender Based Occupational Discrimination in Turkey

Are you worried about the deadline and the quality of the papers you have to do? We would recommend you to buy scholarship essay at Pro-Papers website, though you can also get a helpful advice from our writers for little money.

2.2.1: Gender based comparison of human capital in Turkey 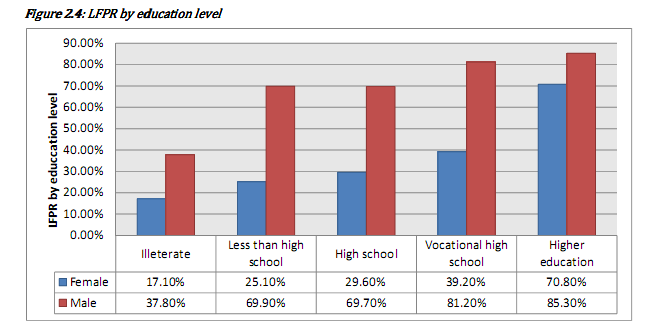 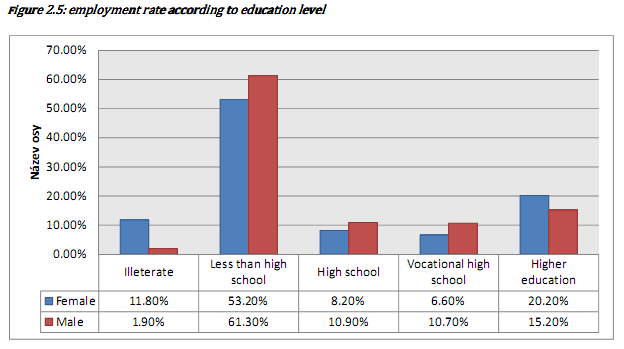 The graph above shows that among illiterate and higher educated women, the employment rate is higher than respectively for men. However, the unemployment rate depicted in the above graph occurs because of the disparity between the rural and urban regions. Hence, in order to have a better and in-depth understanding of the gap in employment, we shall move our analysis towards the gender based occupational discrimination in terms of urban and rural regions.

2.2.2: Urban and Rural Comparison of labor force in Turkey

During 2011, the total labor force participation rate was 49.9 percent in Turkey. This percentage was exceptionally low than the participation rates of OECD and European Union Countries. Furthermore, with working age in Turkey assumed to be 15+, only 45% of the people were employed.

Interestingly, the in-depth analysis of the above table indicates that the female labor force participation rate in Turkey varied significantly from rural to urban area. In rural areas, there were high rate of participation and employment of labor force and this was primarily associated with female workforce. The data gave clear evidence that the female participation rate in rural area is higher than in urban areas. According to the statistics of 2011, the 44.3% of the total employed females in Turkey were living in rural regions of the country and among them, 90.4% were illiterate or were educated for less than high school education level. Thus, there is a high rate of illiteracy or low education levels in Turkish Female Population.

However, we cannot blame the household status of the Turkish Women as the primary reason for low education level. While this problem is majorly prevalent in the rural areas, we can blame the Turkish Society for forcing agriculture as the primary reason as cultural employment for women. Thus, while promoting agricultural activities for women, Turkish society passes over the education.  The low literacy of Turkish Women is just not present in rural areas as the situation is almost same in Urban areas as the percentage of illiterate and less than high school educated women is 44.9 percent, which again is a very high rate concerning urban population.

In contrast, the position of men is far better than women with almost same literacy index in rural and urban areas. The overall ratio between male and female participation rates is nearly 2.5 times, however, the main reason for significant gender gap and gender wage gap in Turkey is because of low participation of female workforce.

While analyzing the employment areas of the less educated women, may researchers have coined the fact that even in urban areas of Turkey, women workforce is concentrating on rough and irregular areas. Furthermore, due to psychological prejudice of employers for female workforce and high level of rivalry in job seeking in urban areas, the illiterate and low educated women in these areas either work on low job security environment or with long working hours but extremely low wages in comparison to male workforce and a result, most of the female population in the  country prefers to get married and  become housewives. The fact was also revealed in a report issued by World Bank during 2009 related to Turkey, in which the report said that there are no women’s preference, working in informal and unskilled areas in urban, actually, it originates mostly from being exposed to high amount of discrimination. Illiterate or low educated women population in the urban areas faces complex cultural and economic barriers that act as constraints in their participation in the labor market. Here, economic barriers are related to the existing prejudice and partial work conditions for poorly educated workforce in the urban areas, and cultural barriers are related to the a orthodox constraint of women as caregiver for their family and being a care taker for the family who is responsible only to stay at home.( Female Labor Force Participation in Turkey : Trends, Determinants and Policy Framework 2009)

Thus, till now we can conclude that even though the practice of labor discrimination is prohibited in Turkey, there are a number of evidences relating to gender discrimination on the Turkish Labor Market. Hoever, the report from World Bank and other statistical data that we have collected from different sources does not prove that the discrimination against the female workforce is because of active discrimination against the women. This could also be a result of the traditional accepted pre-conceived gender division in the Turkish Society, where females are preferred to get married and become housewives rather than being a professional or this could also be a negative effect of ineferior human capital characteristic of women, particularly in terms of education.( Cudeville et all , 2007)

Need some help with a term paper because you are not keeping up? Among a wide variety of writing services, Pro-Papers is considered the best "pay someone to write my term paper" services of a kind.

The other reason that could also be a primary reason for gender based occcupatioanl discrimination in Turkey can be experience gained by the both the genders at work. Since there is a direct relationship between the quality of training, expereience and number of years at work to the wages offered, studying this relationship can be a great help for us. The atbel below has provided us with some useful information. While analysing the labor force participation rate of both the genders at work, we can observe that allocation rates differ according to the age.

The above histogram indicates that the higher labor force participation rate for men is between the age of 24-49, however, for women this age is between 24-34 age group. Low rate of partiicpation in the labor market for the 20-24 age group men and women can be explained by the fact that by this age women in turkey is under fertility while for the men this period is the period of achieving higher education.

The second approach to the labor cost is related to working hours spent by both the gnders at their work. In Turkey, the women participation is only limited upto 40 weeks and their participation at work after the 40th week is extremely low. This explains the low participation by the female workforce in Turkey.